Drew has returned his SIR (Statement of Intent to Register) to UC Irvine and is planning to go there starting Fall of 2003!

I exchanged e-mails with Devan Hunter and Robbie has decided to attend Sonoma State.

Drew has been accepted into a number of colleges for next fall, including UC Davis, UC Santa Cruz, UC Irvine, Sac State and San Diego State. With many of the UCs requiring a commitment by May 1, he and I made a quick trip to Southern California to check out UC Irvine on Thursday, April 17 and Friday, April 18.

Drew and I took an early morning Southwest flight from Sacramento to Orange County's John Wayne Airport. A quick ten minute cab ride from the airport got us to the campus. We spent an hour and a half in an overview and sales pitch for the school followed by an hour presentation by the School of the Arts. Drew has applied to UC Irvine as a Drama major.

After a quick lunch, we had a guided walking tour of the campus. I was very impressed with the campus; it is laid out around a central park with lots of trees. Next, we took a tour of the on-campus dorms. The dorms are very different than my experience at UC Davis. At Davis, I lived in an eight story high-rise in a group with three other eight story buildings on an open flat wind blown plain. All of the dorms on campus at Irvine are small, two or three story buildings on hillsides. The overall feeling was very intimate. After the dorm tour, Drew attended a class--Drama 35, Speech for Theatre--for an hour and a half, while I sat in the coffee house at Arts College and read my book.

At the end of the day, we caught a shuttle to a nearby hotel and rented a car. After checking in, we drove to Newport Beach which is literally about ten minutes from the campus. Heading south to Laguna Beach, we ended up having a leisurely dinner at an upscale Mexican food restaurant. It almost 10:00 p.m. by the time we got back to the room. With a 5:00 a.m. start to day to catch the early flight, it was a long day.

Friday morning, Drew and I took the rental car and drove around the campus to get a feel for the area and the surrounding neighborhoods. There is a lot of open land east and north of the campus.

I ran into Kurt Snipes in the last month in the wireless networking aisle of Fry's. It turns out that Kurt did his undergraduate work at UC Irvine. When I ran through the list of colleges that Drew was considering, Kurt said "you know, I was an anteater." The school's mascot is an anteater! 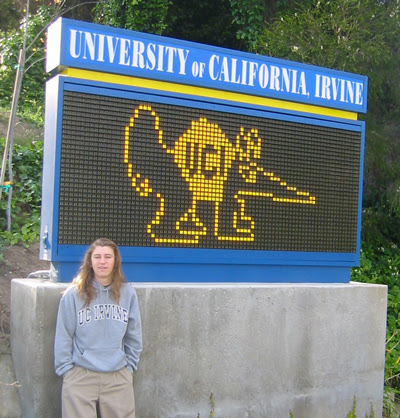 We had breakfast, dropped off the car and hopped the flight back to Sacramento. Getting back into Sacramento, Drew and I picked up Jack at daycare.

Jack is four and will be five at the end of August. He is starting kindergarten this fall. Sharon and I have been debating the relative merits of a number of different schools: the Elk Grove pubic school system versus various catholic schools and other alternatives (Waldorf?!).

It feels more than a little incongruous to be evaluating colleges for one son, while looking at kindergartens for other...
By Heringer at 4/24/2003 06:06:00 AM No comments: