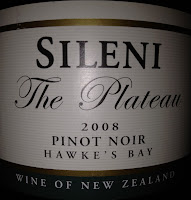 Although Jack is getting to be a little too much of a teenager, the three of us had a nice Christmas morning opening presents around the tree. We had a nice lazy breakfast of waffles.

After breakfast, Sharon's nephew Kevin came over. With Tommy, Becky and Eric in Arizona spending Christmas with Becky's dad, Kevin spent the day with us. For the third year in a row, we went out for a movie on Christmas Day. The four of us went to Sherlock Holmes - Game of Shadows. Both Sharon and I enjoyed the movie.

The four of us finished the day with a Christmas dinner of Chicken Cordon Bleu. On the first Christmas that I celebrated with Sharon, she made chicken cordon bleu for her parents and I. We opened the bottle of pinot noir that I brought back from New Ze@land.
By Heringer at 12/25/2011 11:59:00 PM