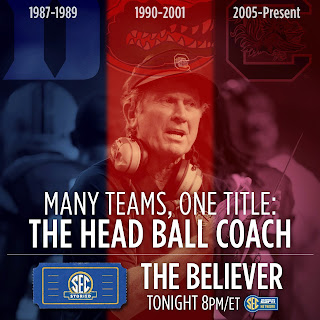 Traveling for work, I walked into the hotel exercise room and got on the treadmill just as the The Believer by Kenny Chesney and Shaun Silva was starting. This is the twelfth film in the ESPN Films SEC Storied series. An episode guide for SEC Storied is here.

The Believer is a biography of Steve Spurrier. He has had an amazing career as both an athlete and a coach, including:
Although I felt like the last ten minutes were more than a little soft, this is a solid biography. Most of the original 30 for 30s were an hour long. Many of the more recent 30 for 30 Volume 2 films have been stretched into an hour and a half or two hours. I think that some of them have suffered from the longer length. The films would be tighter and more effective if they were shorter…

The Believer is not currently available in iTunes or on Amazon.