My new boss passed away unexpectedly. 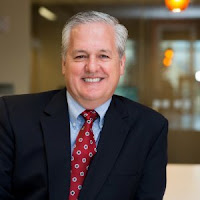 Steven Karl Nebel, husband, father and friend, passed away suddenly on Monday, January 9th, 2017 at the age of 57. He was born on May 12, 1959 in Camp Lejeune, North Carolina to Martha and Rudolf Nebel. Growing up in a busy military family, he developed great confidence and the ability to befriend anyone. Karl received his Bachelor's from the University of Florida and an MBA from the University of Central Florida. Karl held a number of leadership positions in the greater Orlando area before entering the business consulting field, where he worked for nearly 20 years. As a well-respected consultant, his vast experiences across multiple industries allowed him to drive change and transform every project he touched. Karl had recently accepted a position at Adventist Health in California as their new Chief Strategy and Information Officer. Karl made networking into an art form and couldn't go anywhere without recognizing a friend or colleague. Karl was a pillar of the Orlando business community, serving on boards for the Metro Orlando Economic Development Commission, Florida Hospital's Children's Hospital and recently as board chair at A Gift For Teaching. He led in-kind and pro-bono efforts at many other non-profits in Orlando as well. Karl was the perfect family man, a fantastic cook and was at his happiest in the kitchen or out at his Big Green Egg. He would always go all-out for Florida Gator football games and loved to see his friends and family enjoy his masterful cooking. He is survived by his wife of 32 years, Sonia Nebel and two children, Alex Nebel and Mallory Nebel. He is also survived by his mother, Martha Nebel, Chipley, FL, brothers Michael Nebel, Tacoma, WA, Tamas Nebel, Windermere, FL and sister Erika Arnold, Lewes, DE. A celebration of Karl's life will be held at the First United Methodist Church of Winter Park at 1:30pm on Monday, January 23rd. The Nebel Family requests that, in lieu of flowers, donations be made to A Gift For Teaching in Karl's name. Karl was a wonderful husband, a loving father, a tireless mentor and a true friend to many. He will be greatly missed.
By Heringer at 1/25/2017 11:59:00 PM