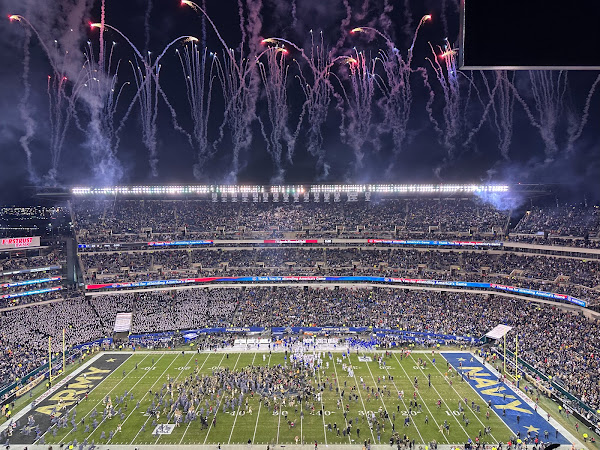 The group had breakfast in the M Louge at the hotel. Max's son Michael had gotten tickets to a tailgate at a Chickie's and Pete's. Six of us jumped in an Uber XL and headed to the stadium.

Unforunately, we made a tactical error. We had the Uber take us to the stadium. It turned out that the tailgate was in a restaurant about a mile and a quarter from the stadium. After some initial confusion, we humped our way there. It was different doing a tailgate indoors. From there, we walked back to the stadium.

Army won the game by the score of 20 to 17 in the second overtime. It was the first overtime in the history of the rivalry. Frankly, it was a very boring game until the overtime.

Both offenses were stagnant. Army was 2 for 12 in passing. Navy was 1 for 4 in passing; they didn't complete a pass until the overtime. The Navy Quarterback [Xavier Arline] carried the ball 28 times. It seemed like the only the play that Navy ran was an option where the quarterback kept the ball on a dive.

It was a little bit of an adventure getting an Uber to pick us up and take us back to the hotel. We ended up having dinner at Spasso Italian Grill a couple of blocks from the hotel. We were able to get a couple of tables in the bar. I had Rigatoni Meatballs [MARINARA SAUCE, FRESH RICOTTA CHEESE].