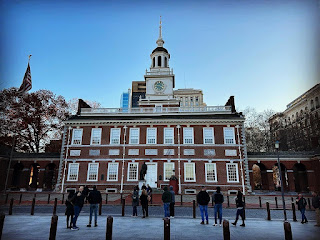 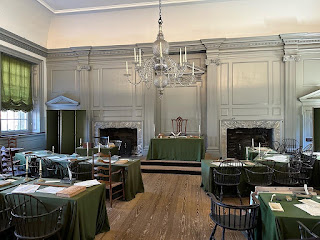 Moving slowly after a late night, the group eventually had a lazy banquet breakfast at the hotel.

One of my objectives for the trip was a tour of Independence Hall. I have been to Philadephia three other times, but never had a chance to visit the site. In early November, I got ten tickets for 11:20 am. After breakfast, eight of us wandered down to the hall and took the tour. Having read a number of relevant biographies, it was cool to walk through the site. The tour guide did a nice job.

From there, Max led us to the river front. We toured the cruiser USS Olympia and then the submarine USS Becuna. I enjoyed the guided tour of the submarine a lot more than I thought I would. I stayed overnight with Jack on a submarine in 2006 when he was in the Cub Scouts and toured a submarine in Baltimore with Nooter and Wallen in 2005. Additionally, Max took Wallen and I on a tour of a Trident submarine in 1991.

We had a late lunch at the Red Owl Tavern. I had a Sourdough Grilled Cheese [apple butte, porchetta, arugula, provolone, gruyere]. Afterwards, everyone headed to the hotel to relax and nap.

We had an early dinner at Butcher and Singer. A group of us walked the mile and a quarter to the resturant. The group totaled 16, including Max's son and his wife, his daugther Tracy and her husband Nate and his nephew Zach. While almost everyone had an 18 oz. Delmonico for the entree, I had King Salmon.

Sharon and I had dinner in this general area when we picked Jack up from the Wharton sports business academy at UPenn in 2015. I remembered the area as having some nice bars and restaurants. I was hoping that we would be able to explore the area after dinner. Unfortunately, every place was packed. After trying to find a place near the restaurant and giving, we started walking back towards the hotel. We ended up stopping for a beer at the Caribou Cafe.