We actually slept fairly late and had a light breakfast in the hotel. Packing up the room, we got a taxi to the main train station in Florence. This is one of the two days that we did not pre-purchase train tickets. Originally, I had pushed the idea of stopping in Pisa and checking out the Leaning Tower of Pisa. This deep into the trip my aggressiveness had faded and I punted on the idea. Instead, we got a direct train from Florence to La Spezia. Although it passed through Pisa, it didn't stop.

We got to La Spezia by a little after noon. At this point, we made a small tactical error. Instead of the taking the regional train to Manarola, we hopped in a taxi. The taxi ride was about 20 minutes, but the taxi couldn't enter the town. It had to drop us about 1/2 mile above the town. We had to drag 200 pounds of luggage to the hotel. Luckily, it was all downhill. We finally got to the hotel. We are spending the next two nights at the Hotel Marina Piccola.

After lugging the luggage up three flights of narrow stairs, we had lunch in the hotel's restaurant. The food was very good.

There is a seven mile hiking trail that stretches between the five towns in Cinque Terre. We are staying in the second of the five towns. After a leisure lunch, Sharon and I left the kids crashed in the room and hiked a short distance towards Corniglia and back. Unfortunately, most of the section between Manarola and Corniglia is closed due to landslides. There was a great view of Manarola from the trail! 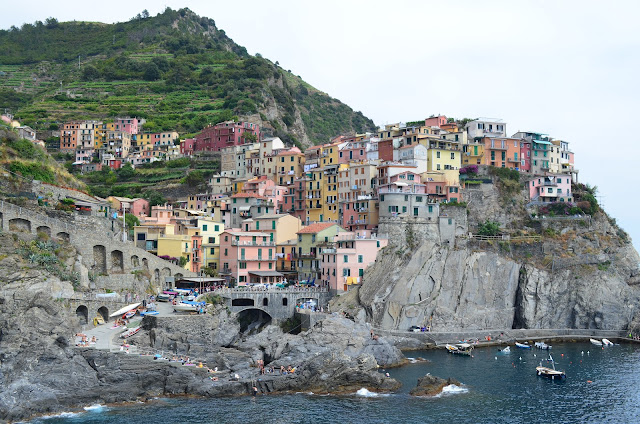 Heading back to the room, Sharon and I picked up Jack headed the other way on the trail. The section between Manarola and Riomaggiore is known as Via Dell'Amore. After buying two day hiking passes, we hiked to Riomaggiore, explored the town a little bit and then headed back. There was a bar on the trail close to Manarola and we stopped for a couple of cold drinks. The bar was perched on the edge of the narrow trail with a 100 plus foot drop to the water. Have I said recently how much I don't like heights?

After getting cleaned up, we had a great meal at Trattoria dal Billy. The restaurant is perched high on the hill overlooking the town and the small harbor. We had a great seafood appetizer that included six or seven plates of different seafood. I had a seafood pasta and all of us shared a sea bass. The food was very good, probably the best that we have had on the trip so far. The pasta is great and the seafood is extremely fresh.
By Heringer at 7/04/2012 11:59:00 PM