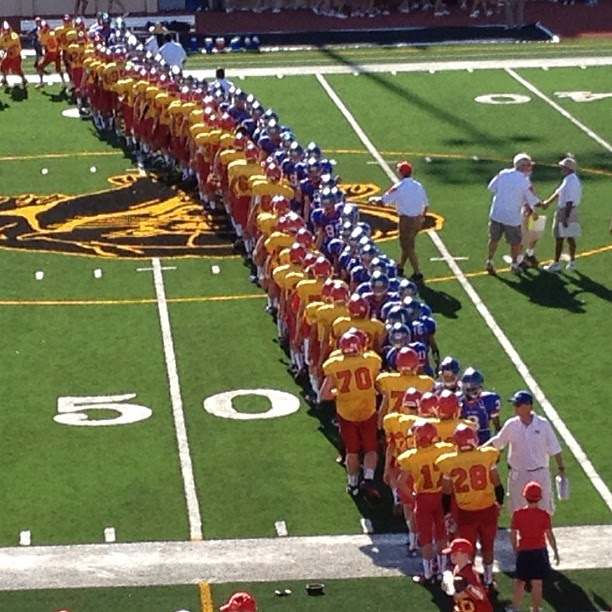 Sharon, Jack and I spent a long day at Hughes Stadium for the 2012 Holy Bowl. Sharon got there at 11 am to help set-up the Jesuit Booster's tailgate. Jack and I rolled up about 1 pm. We found a spot in the northeast corner of the parking garage out of the sun. The Renterias joined us there.

The Freshman game kicked off at 3:00 pm. We sat with the Chappelles; they had a great pop-up shade set up high on the 50 yard line and some refreshments. The Marauders looked flat and trailed at half-time by the score of 7 to 0. Based partially on CB's 46 to 12 loss to El Camino, I think that everyone, myself included, thought that the Marauders would roll over the Falcons. On the strength of two very long runs by Dalvin Jamal-Milton [#27], the Marauders scored two second half touchdowns and held on to win by the score of 14 to 7.

Unfortunately, Jack did not get to play. He was extremely frustrated when he got back to the car after the game. It is going to be a long seven weeks...

The Freshman Jesuit Marauders now have 2 wins and 1 loss. The game log is here. The Marauders play Napa in Napa on Thursday. Napa appears to have a very good freshman team.

After the freshman game, we headed back to the car with the Renterias and got some food at the Jesuit Booster's tailgate. We had to get back into the stadium before 6:30 pm. We watched the second half of the Jr. Varsity game; Jesuit won by the score of 50 to 0.