Playing their second football game of the season on Thursday night, the Jesuit Frosh Marauders faced El Camino at El Camino Stadium. Jesuit blocked a punt and carried it into the end zone to lead the game by the score of 6 to 0 at the end of the first quarter.

Over the course of the game, Jesuit wasted a couple of good scoring opportunities. Jesuit fumbled the ball away twice when they driving were deep in El Camino territory. At half-time, the score was tied 6 to 6.

The Marauders now have 1 win and 1 loss. The game log is here.

Jack was very frustrated after the game. He played one play on the PAT team. This was true only due to the fact that someone who was supposed to be on the team didn't show up. I am not sure where he falls on the depth chart, but the Marauders only played four wide receivers (three in the second half) and one free safety. I encouraged him to soldier on and draw on some of his experiences with the Gunners. It could be a long two months...

I was surprised by the fact that the starting quarterback played all but about 4 of the 100 plus plays in the game. I don't think that he played on the kick return or PAT teams, but played quarterback on offense and free safety on defense on every play. I was expecting that they would rest him occasionally and that Jack might have a chance to play some free safety. 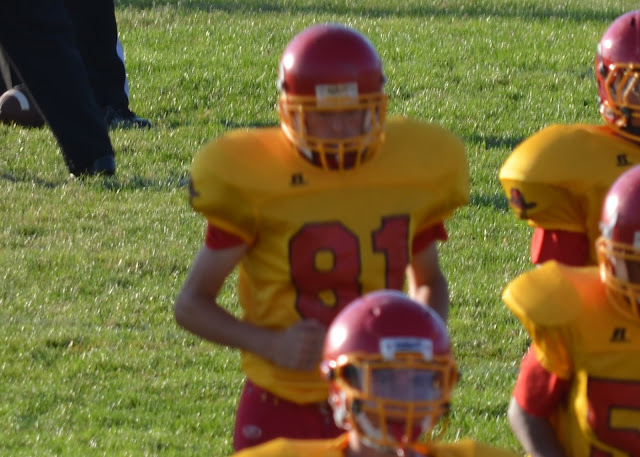