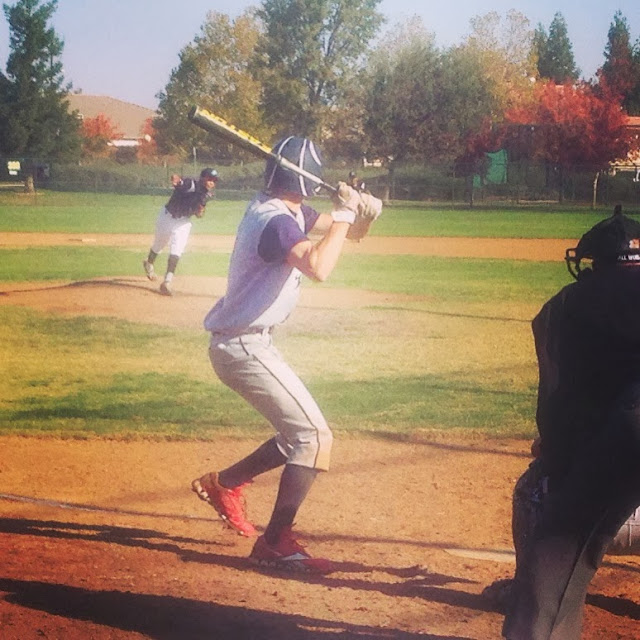 On Saturday, the Walbeck Baseball Academy played in the first day of the All World Sports Edge of Darkness baseball tournament at the Galt Community Park. They played the Molina Marauders in the first game at 8 am. Cooper is now playing with Walbeck; he and Jack played together on the Gunners and Outlaws since 2008. In addition, there were two other players from the Jesuit freshman baseball team: Jared and Kyle.

Leading off, Jack was 1 for 2 with a single, a walk, reached on an error, a stolen base and two runs scored. In his first at-bat, Jack hit a lazy fly ball into left center. The outfielder lost the ball in the rising sun and Jack was safe at first. He stole second, went to third on Kyle's sacrifice fly and scored on Jarred's sacrifice fly. Jack had a great second plate appearance. Running the count to 3 and 2, he fouled off a couple of pitches and then golfed a line drive into centerfield. Jack eventually came around to score another run. In his third at-bat, Jack walked. With the bases loaded and one out, he was forced out at home.

In the field, Jack played the entire game in left field. He had one put-out.

Trailing 4 to 2 in the bottom of the sixth with time running out, Walbeck rallied to score three runs and won the game by the score of 5 to 4.

They turned right around and played the East Bay Hackers. Rod thought that he recognized a couple of names from the Concord Patriots.

Leading off, Jack was 1 for 2 with a single and a walk. In his first at-bat, Jack hit a 1 and 2 pitch for a very high fly ball to right center for an out. Jack ran the count to 3 and 2, fouled off two pitches and then hit a hard ground deep in the hole on the left side for a single in his second plate appearance. The shortstop was able to knock the ball down, but not able to make a throw. In his third at-bat, Jack walked, but ended the inning at first.

In the field, Jack played the entire game in left field. He had two put-outs.

With too many walks and fielding miscues, Walbeck fell to the East Bay Hackers by the score of 8 to 3. At least four of the runs were unearned.

Walbeck finished the day ranked fifth out of the six 16u teams in the tournament. Unfortunately, this means that the boys will be back to play at 8:00 am on Sunday morning… Interestingly, no team had more than one win.
By Heringer at 11/10/2013 06:00:00 AM