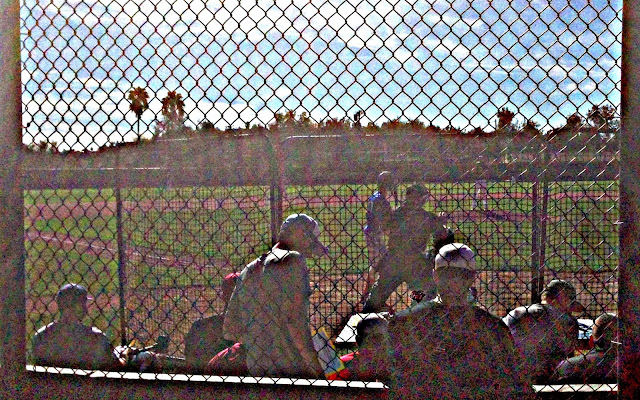 While Sharon lounged at the hotel, Jack and I headed back to Anderson Field at Occidental College for the second day of the Academic West Coast Meets East Coast plus Ivy League Schools DeMarini Top 96 Showcase. Drew met us at the field.

Jack played in a nine inning showcase game. The rules for the batters are designed to speed things along. The batter starts with a 1 and 1 count. If he walks, a pitch runner is put on base. If the batter walks a second time, another pitch runner is added, but the count stays at 3 and 2. Combining these rules with an umpire that was calling a low outside strike and the fact that each pitcher only pitches two innings, you have the recipe for a long day at the plate.

Jack was 0 for 3 with two strike-outs, a walk and a hit by pitch. In his first at-bat, Jack struck out swinging on a 2 and 2 pitch. Jack struck out swinging on a 3 and 2 pitch in his second plate appearance. In his third at-bat, he was hit by a pitch with the count 2 and 2. Jack then walked on a 3 and 2 pitch. With the count staying at 3 and 2, he hit a grounder up the middle. The shortstop made a great diving stop in front of second base and threw Jack out at first.

Jack got a chance to be one of the pitch runners. He stole second, went to third on a hit batter and then ended the inning there.

I wish I had counted the number of strike-outs. My guess is that there were more than 65 strikes-out in the 84 at-bats in the game that Jack played. Most of the boys were immediately falling behind in the count. Adding to the fact that they never got to see the same pitcher twice made for a rough day.

Jack was more than a little discouraged at the end of the day as we walked to the car. I reminded him of how well the fall ball went and how much he enjoyed the first showcase. I am not sure where baseball is going to lead Jack, but I am committed to giving him opportunity and repetition.

We headed back to the hotel to pick up Sharon. I was surprised how quickly Jack's mood bounced back. We spent the rest of the day with Drew. Jack enjoyed spending time with his brother. We went to Americana at Brand and had an early dinner at Din Tai Fung Dumpling House #3. We all really enjoyed the dinner of chinese dumplings. It is one of the most enjoyable meals that I have had in a while…

After dinner, Jack, Sharon and I headed to the Burbank Airport. In spite of the fact that it was Sunday night at the end of the Thanksgiving holiday, the airport was relatively sane. We caught a late 8:45 pm flight back to Sacramento and were home before 11:00 pm.
By Heringer at 12/01/2013 11:59:00 PM