By Tuesday morning, everyone was back up to close to full speed. We spent the morning on the boats.

Rick and Karen were involved in a motorcycle accident in early July. Rick hit a patch of transmission fluid in an intersection near Clear Lake at fairly slow speed and dropped the bike. They both broke their ankles and had surgery. Tomasin performed the surgeries! Rather than use crutches, they were using wheeled carts. Rickie preferred the carts to crutches because it allowed him to have his hands free while he worked. It was quite a sight to see Rick and Karen going everywhere with the carts over the course of the week. 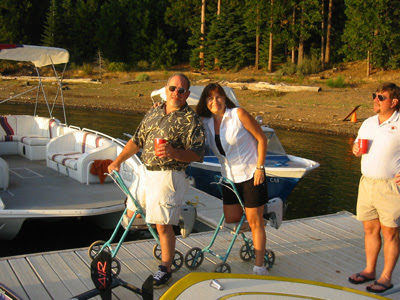 After Dinner, the boys went to the Ranch House to play pool and more horseshoes. Bachman and Hunter beat Tomasin and I two straight games of pool. Bachman then insisted that we play more horseshoes behind the bar under the lights. I had enough horseshoes for the day. Wallen and Tomasin played Bachman and Tomasin and won two of three games. Wallen threw a double ringer to win the third game.