John Wallen, Sharon, Jack and I took the ferry to Seattle to see the Red Sox play the Mariners at Safeco Field. We stopped and had lunch at J&M's before the game. Pedro Martinez pitched for the Red Sox and the Marineers lost 5 to 1. 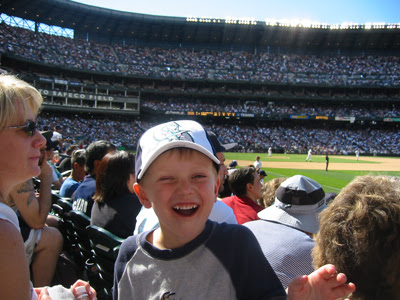 After the game, we took the ferry back to Bremerton. Meeting up with Jill Wallen, the five of us went to dinner at some friends of the Wallens. The Greggs have a very interesting modern house on Osyter bay.

In one of those odd six degree of separation stories, the Greggs had spent a few years in Fresno and knew my ex-wife's sister Sayre and her husband Byron.

We played some ping pong on a table set-up next to the water, had a few drinks, watched a large family of raccoons fight over dog food and had dinner about 10:15 p.m.! It was almost 12:30 a.m. before we got home.