In spite of a late night, we were up early. Before about 9:00 a.m., you could fire a cannon off in the casinos and not hit anyone. We walked over the to the Monte Carlo for breakfast.

Afterwards, we walked north up the strip and wandered through the Aladdin into the connected shopping mall called Desert Passage. Several of the hotels and casinos have very elaborate shopping malls connected to them. 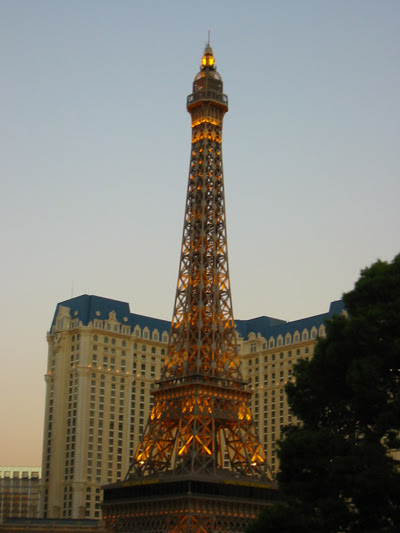 Those people who know me well know that I am not a heights person. Nevertheless, we went up to the top of the replica. Sharon and I are talking about a trip to France and Holland in 2004 and I thought that going to the top of the replica would be a good warm up for the real thing. Sharon took this picture from the top looking south down the strip. 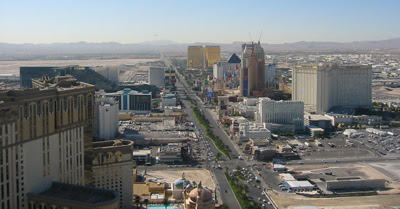 While Sharon took a nap, I ran on the hotel treadmill and watched the mayhem of the Yankees and Red Sox in Game 3.

We had an early dinner at Drais in the Barbary Coast. The Barbary Coast is a small, older hotel in the middle of the strip. We had walked by it earlier in the day and were even more skeptical we went got out of the cab and walked into the Casino. We were pleasantly surprised. Drai's was named one of the top 5 Las Vegas Restaurants in the 2001 Zagat Survey. I rarely recommend restaurants, but this is a place I would recommend (warning: it is pricey).

We went to Zumanity at New York New York. Zumanity is billed as another side of Cirque du Soleil.