Jack and I went with Randy Wong and his son to the Sacramento Kings versus Miami Heat basketball game. The two boys are only a couple of months apart in age. The Kings just could not get over the hump in the fourth quarter and lost by a score of 98 to 87.

Jason Williams scored 16 of his 20 points in the first half, including four 3-pointers. He looked a man on a mission to prove that the Kings were wrong to have traded him. Alonzo Mourning blocked seven shots. Peja Stojakovic was awful; he went 3-for-16 and missed all six of his shots in the fourth quarter.

At half-time, we met up with Larkin. Wong, Larkin and I appear together in the picture that I am going to post next week for 1987. 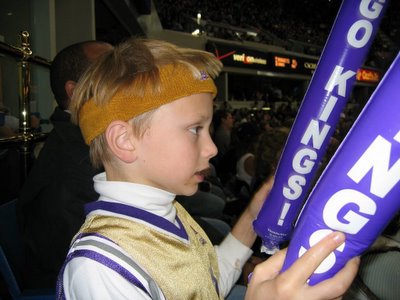