Drew, Jack and I went to the Sacramento Kings versus Dallas Mavericks game. With Bonzi and Peja out, Kevin Martin and Francisco Garcia started. I frankly had little hope that the game was going to be competitive. After falling behind in the first half by ten points, the Kings made the game close in the second half. Late in the fourth quarter, Nowitszki took over and the Mavs beat the Kings by a score of 105 to 95.

At one point in the fourth quarter, Garica shot a three from the corner and I loudly screamed "don't take that shot." This got a big laugh from the crowd around us... Garica was 0 for 2 from three point range in the game; he is 4 for 32 (13%) from 3 point range for the season. 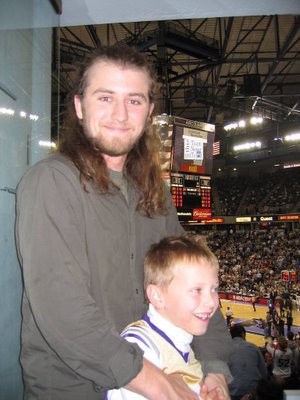