After two straight rain-outs, Jack's baseball team played its fourth game of the season against the Angels. Jack was 1 for 1 with two walks at the plate and scored twice.

In the field, he played left field one inning, shortstop two innings and first base one inning. Jack made a couple of nice plays at shortstop including a diving stop to his left where he plowed into the runner coming off second and a hard grounder that he fielded and threw the runner out at first. He also made one diving catch on a sinking line drive while he was playing first. 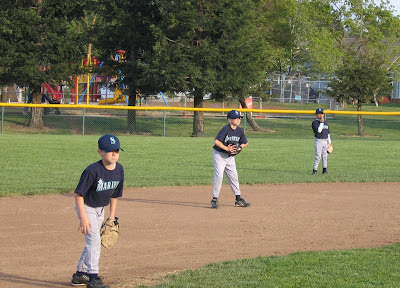