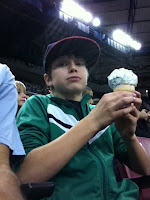 Jack and I went to the Sacramento Kings versus Houston Rockets NBA basketball game. After leading most of the game, the Kings were outscored 23 to 12 in the fourth quarter and lost by the score of 102 to 93.

Kevin Martin was the high scorer for either team. Martin had 22 points on 6 for 15 from the field, 3 for 6 from three and 7 for 7 from the free throw line.

DeMarcus Cousins was the high scorer for the Kings. In 29 minutes, Cousins scored 19 points on 8 for 15 from the field and 3 for 5 from the three throw line. He added 8 rebounds and 4 blocks. Beno Udrih and Tyreke Evans were terrible. Udrih went 0 for 6 from the field, while Evans went 6 for 21. Overall, the Kings shot 38%.

I spent most of the game watching Cousins, rather than following the ball. Cousins is a force around the basket, but he has a tendency to walk up the court in transition. Except for a rare fast break, he just does not hustle in transition.

The Kings lost their fifth straight and the 19th of their last 21 games. With 30% of the season gone, the Kings are on a pace to win 16 games. This is fewer than the franchise low of 17 wins two years ago. The Kings now have 2 wins and 4 losses in games that I have seen in person this season.