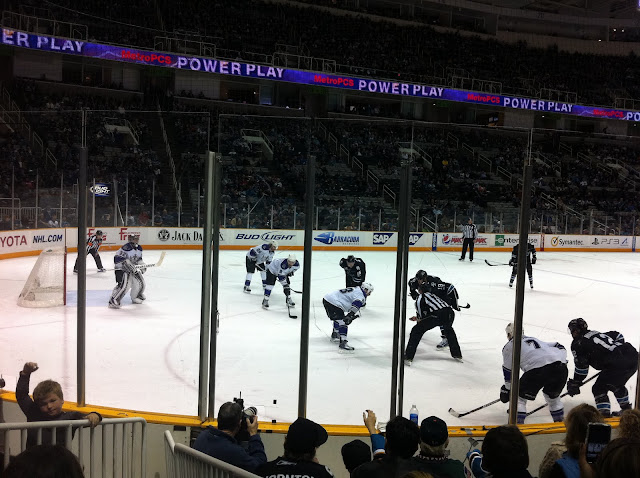 Taking off in the late morning, Sharon, Jack and I headed to the South Bay for a couple of days. The first stop was the Winchester House. For years, Sharon and I have talked about touring the house. It was not quite what I expected. When they talk about craftsmen working on the house for 38 years, I was thinking more Hearst Castle. The house is more of a curiosity than a masterpiece. The Grand Mansion Tour that we took covered 110 of the 160 rooms in the house.

From there we headed to the Hotel De Anza. We got settled into a very comfortable junior suite. Significant for its architectural style, the Hotel De Anza is one of San Jose's few Art Deco buildings. It is listed on the National Register of Historic Places. More importantly, it is less than three blocks from HP Pavilion where the San Jose Sharks play.

After checking into the room, we had a drink in the Hedley Club Lounge. Back to the room to fresh up, we headed to the arena about 6:45 p.m. We had three tickets to see the San Jose Sharks versus Los Angeles Kings NHL game.

We had a great time. This was the first hockey game that Jack had seen; he really enjoyed it. Unfortunately, with the game tied 0 to 0 in the third period, the Kings scored four goals in the third period to win by the score of 4 to 0.

We wandered back down the street to the hotel. The hotel offers a feature called "Raid Our Pantry." They have a stocked pantry that you can open with your room key from 10 p.m. to 5 a.m. Jack wanted to head there and we loaded up on some late night snacks. Jack talked about this the rest of the trip; he said that he was going to patent the idea and sell it to other hotels.

Email ThisBlogThis!Share to TwitterShare to FacebookShare to Pinterest
Labels: Sharks