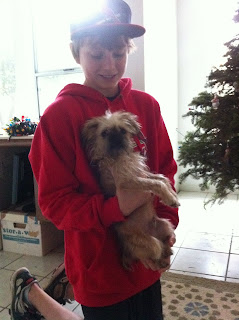 Sleeping late, we eventually had breakfast in the La Pastaia restaurant which is located in the Hotel De Anza. After breakfast, I wandered around the downtown looking for a couple of waymarks. In particular, the site of the City Gardens Nursery where Louis Pellier, founder of California's prune industry, introduced the French prune-la petite prune d'Agen-into California. The farm that I grew up on included more than 600 acres of prunes.

Checking out of the hotel, we stopped at a Relax the Back store that Sharon had seen on the previous day and then headed to the NASA Ames Exploration Center. This turned out to a smaller venue than I expected, but had a couple of interesting exhibits, including a moon rock.

From there, we headed to downtown Sunnyvale and had a late lunch with my sister Lee Ann and her husband Dean at Thai Basil.

Lee Ann got a Brussels Griffin a couple of months ago. So after lunch, we headed over to their home to play with the puppy.