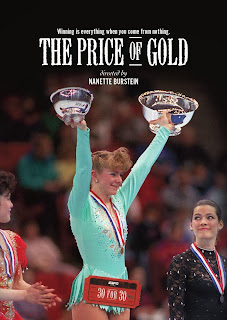 Sharon and I watched The Price of Gold. This is the sixteenth installment of ESPN's 30 for 30 Vol II. An episode guide for Vol II is here.

The Price of Gold looks at Tonya Harding, Nancy Kerrigan, the attack on Kerrigan on January 6, 1994 at the U.S. Figure Skating Championships and the 1994 Winter Games in Lillehammer.

This is really the story of Tonya Harding. The documentary looks at her turbulent childhood, life and and career, including some remarkable footage of her as a child interacting with her mother. Harding participated in the making of the film and her interview is woven from the start to the end.

In addition to the interviews with Harding and others, the documentary uses a lot of old footage. All of the footage from attack on Kerrigan through the end of the Lillehammer Olympics is particularly compelling.

While not my favorite from Volume II, this is a very good documentary. It does an excellent job of going back and exploring Tonya Harding, the attack on Kerrigan and the aftermath of the attack. It would have been nice to have gotten an interview with Kerrigan. In the footage from the 1990's, Kerrigan seems so oddly detached and distant.

The Price of Gold is currently not available on Amazon or in iTunes.