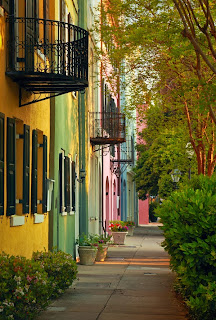 After breakfast at the hotel, we wandered down to the Mills House Hotel. The plan for the morning was a walking tour of the city. Working with the hotel concierge on Friday night, we had booked a walking tour. The tour that the concierge recommended was actually full so we ended up with Charleston Strolls. This turned out to be fortuitous; we were the only two people on the tour!

We got a great two hour private tour of the city. We covered the area of the old walled city. I was very impressed. Charleston was founded here in 1680. For comparison, New Orleans was settled in 1718; we spend a long weekend in New Orleans last year.

After the tour, we grabbed lunch at the bar at High Cotton. We split a Grilled Chicken Salad and Fried Oysters Florentine.

Wandering back up Market Street, we headed to the Nathaniel Russell House. Built in 1809 for $80,000, the house is widely recognized as one of America's most important Neoclassical houses and features three important geometric designs: a front rectangular room, a center oval room, and a square room in the rear. The house also includes a three story elliptical spiral staircase. We took a guided tour of the house.

Heading back to the hotel, we had a leisurely late afternoon at hotel. I hung out in concierge lounge and worked on a status report.

After a drink in the Thoroughbred Club, we ended the night with a late dinner at the Charleston Grill in the hotel. We had Seared Foie Gras and Charleston Grill Crab Cake as appetizers and Braised Pork Shank and Seared Flounder as entrees.
By Heringer at 3/14/2015 11:59:00 PM