In 2014 at Sea Ranch, I came across a series of historical markers on my run and during our hike. These included Russian Colony, Site of Klamath Sinking and Del Mar Landing and Lumber Mill.


Russian Colony
1912-1913
Marker 35C-4
See this location on Yahoo Maps in Flickr
See this location on Google Maps
This site is located near 476 Sea Stack, Sea Ranch, California. The Sea Ranch Archives Committee has identified twenty-six historic sites scattered about The Sea Ranch. They have constructed trail markers with information explaining the significance of each place. They were placed as part of The Sea Ranch 50th anniversary being celebrated from Memorial Day 2014 to Memorial Day 2015. The GPS coordinates for this location are 38° 44' 37.0" N 123° 30' 53.7" W. 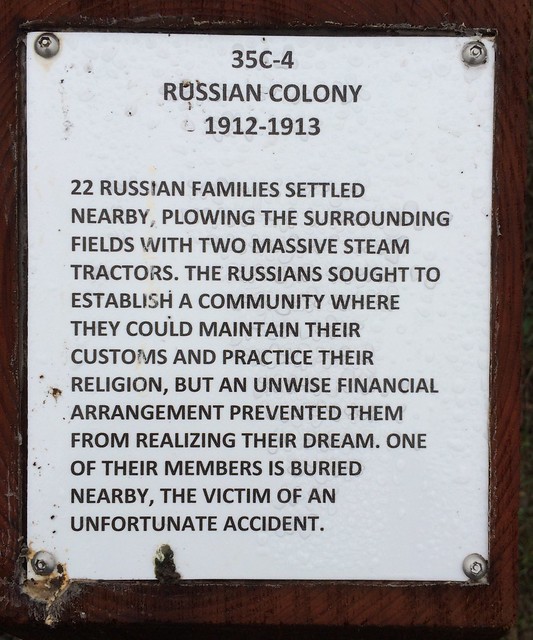 Russian Colony
1912-1913
22 Russian Families settled nearby, plowing the surrounding fields with two massive steam tractors. The Russians sought to establish a community where they could maintain their customs and practice their religion, but an unwise financial arrangement prevented them from realizing their dream. One of their members is buried nearby, the victim of an unfortunate accident. 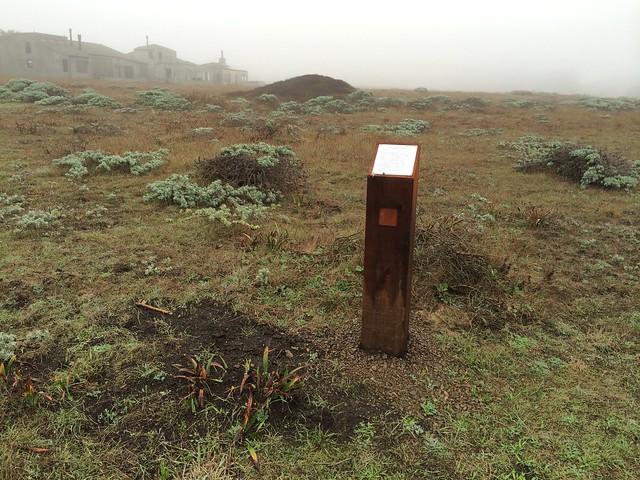 When Emil Noshkin and his wife Mary arrived in the United States in 1912, they had 11 children and 12 pieces of luggage. Emil’s original plans were to establish himself as a flour manufacturer, as he had been in Russia. He probably altered his plans upon hearing of large tracts of land available for farming and ranching. As with the Germans in the 19th century, this opportunity to create a community where they could continue their customs, language, and religious beliefs unfettered by the interference of others, was too good to let go. He mobilized a large group of Russians in San Francisco, and they began their search. The search shortly led Emil to strike a deal with Walter Frick. Frick had purchased 5,000 acres of property at a bargain price from the Bender Brothers’ receivers, when he learned that a group of Russian immigrants was seeking property. The agreement seemed doomed to fail from the outset. A September 6, 1913 article in the Mendocino Beacon commented: “Northern Sonoma county people wonder how the colonists ever came to promise to give a quarter of a million dollars for that nine mile tract below the Gualala River.”

Nevertheless the deal was struck and on August 31, 1912, the Mendocino Beacon reported: “The Sea Foam . . . brought up 29 families of colonists to Point Arena. They are Russian colonists who have secured a big tract of land at Delmar, Sonoma County, and will settle there. Some 200 more families are expected to follow those who came up this week.”

Tragedy struck the group shortly after they arrived. They had ordered two steam tractor engines. The group was notified of the delivery to the Point Arena dock. Emil sent Nicholas Podsakoff and two other men to drive one of them down the coast to Del Mar. A September 14th, 1912, Mendocino Beacon article described what happened. “In the Beacon of February 17th attention was called to the unsafe condition of the oft-repaired bridge across Schooner Gulch creek. [T]he colonists were warned . . . against making the trip south from Point Arena with such a heavy machine over the light bridges of that section, but they proceeded regardless of this warning.” At Schooner Gulch, “When the engine was about to proceed on the bridge, [Podsakoff] was warned by the engineer of the machine not to proceed across the bridge with the engine, but in spite of this admonition he deliberately walked alongside of it as it moved across the structure. [W]hen the structure collapsed under the weight of the engine . . . he was crushed between the timbers of the falling bridge and the tender of [the] traction engine.”

Podsakoff was buried at Del Mar and the stalwart colonists pushed on with the establishment of their community. “A progressive spirit has been shown, as modern farming methods are being employed in every channel possible. Among other implements two traction gang plows have been purchased being the first in this section of the county. General farming, including the growing of cereals, fruits and potatoes, will prove the principal occupation, while dairying will follow a close second. One thousand acres has been set aside by the colonists on which to grow potatoes next year.” (October 26, 1912, San Francisco Call)

It must have been quite exciting for people who had lived in the area for a long time to first witness the steam traction engines with gang plows. The large, awkward machines lumbered up and down the coastline meadows, belching dark black smoke and making a loud, gasping noise, that at times caused one to wonder if they could go on much further. There would be an engineer driving it with two or three men around the tender making sure the monster’s furnace was fed. Attached to the back of it would be the gang plow with its disks, carrying several men standing on it to force the disks into the coastal soil. Things were progressing well for the 22 families living at Del Mar. For Emil Noshkin and his family the American Dream was coming together. Then it all began to unravel when the settlers were unable to pay the mortgage. After defaulting, Noshkin and his group returned to San Francisco and pressed on with their lives. He lived another 40 years engaged in other successful occupations and surrounded by his family.
By Heringer at 7/15/2015 05:01:00 AM