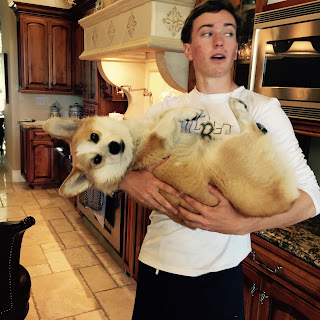 After visiting with Becky, Sharon and I headed to her brother Tim's house. The group included Tim, Kathy, Eileen, a friend of Eileens, Erin, Dylan, Eric, Jim Dunn and the Felettos. We had dinner there before heading to Foy's house. Jack had spent the day wakeboarding on the Sacramento River with the Foys. We hung out with the Foys and two other couples. One of the other husbands was a would-be author who had written a historical fiction novel set in the 14th century called Venetta. He recommended a novel called A Distant Mirror: The Calamitous 14th Century.

We left there after 9 pm to take Jack to the airport; more on that tomorrow morning. I was amazed at the number of fireworks displays that were going off around Sacramento as we drove from Elk Grove to the Sacramento Airport.

I finished the night taking Tiber for a late walk in the neighborhood. It sounded like a war zone with all of the explosions and sirens.
By Heringer at 7/04/2015 11:59:00 PM