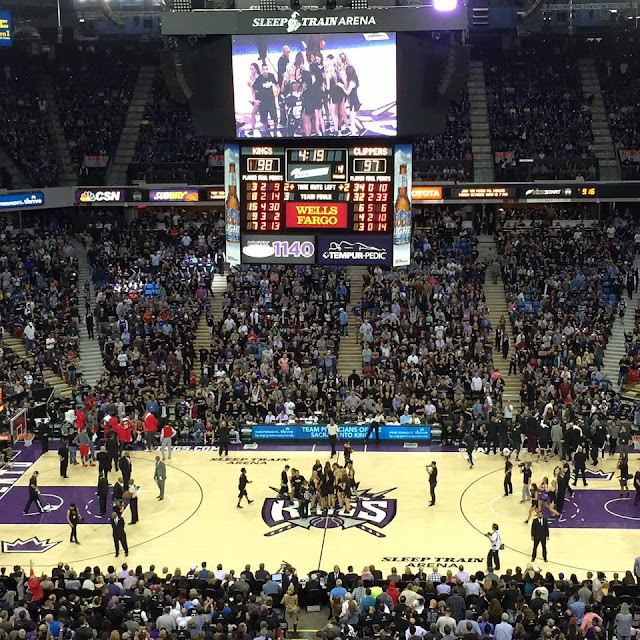 Larkin and I went to opening night of the 2015/16 NBA season to watch the Sacramento Kings versus the Los Angeles Clippers. Trailing by 10 points for most of the game, the Kings tied the game at 95 with 6:22 let in the game. As shown in the picture above, the Kings led 98 to 97 with 4:19 remaining… Paul Pierce made a couple of clutch shots down the stretch and the Clippers pulled away to win by the score of 111 to 104.

DeMarcus Cousins was the Kings leading scorer. He had 32 points going 10 for 21 from the field, 4 for 5 from three and 8 for 11 from the free throw line. Unfortunately, Cousins had 8 turnovers!

Blake Griffin looked good and was the Clippers leading scorer. He had 33 points on 14 for 20 from the field and 5 for 7 from the free throw line.

The Kings offense looked disjointed for most of the game; it looked like they had never played together. The line-up of Collison, Cousins, Gay, Casspi and Belinelli {a point guard, a big man and three perimeter shooters} pulled the Kings back into the game in the fourth period.

Larkin and I wandered down and talked to Snipes at halftime. He was at the game with Craig in section 124, while Keith and one of his friends were sitting in their season tickets.