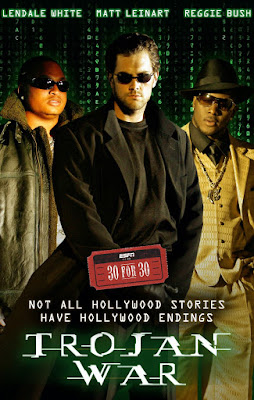 Running on the treadmill at the hotel, I watched Trojan Wars. This is the first installment of ESPN's 30 for 30 Volume 3. An episode guide for Vol 3 is here. I still have one more episode [Angry Sky] of Volume 2 to watch!?!

The film then focuses on USC resurgence under Pete Carroll. Carroll coached the team from 2000 to 2009. During this period, the team had 97 wins and 19 losses (83.6%). In 2003, USC finished with 12 wins and one loss and won its first national championship since 1978. In 2004, USC went undefeated and won its second straight nation championship. Carson Palmer won the Heisman Trophy in 2002, Matt Leinart won in 2004 and Reggie Bush won in 2005.

At the end of the 2005 season in January 2006, an undefeated USC team lost the national championship game to Texas and Vince Young. I enjoyed the footage of that game. I didn't remember that Reggie Bush tried to lateral the ball to a teammate.

The film also looks at the impact of Los Angeles and Hollywood on the team. It examines the NCAA sanctions that the program incurred at the end of Carroll's run and the loss of Bush's Heisman.

As I have said on a number of occasions, I am not a college football fan. I have no interest in USC football. Nevertheless, I enjoyed this documentary a lot more than I expected. It is an engaging film that tells a good story.
By Heringer at 10/14/2015 11:59:00 PM