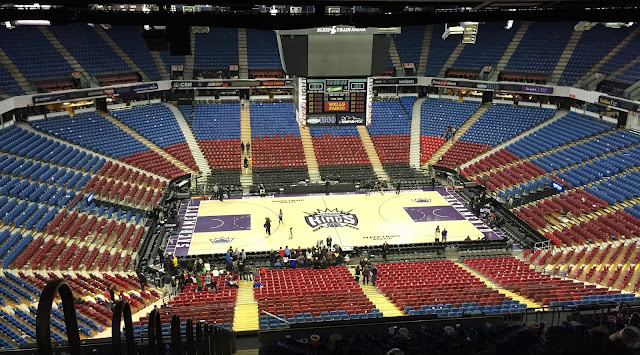 After meeting Tomasin, Mikey, Snipes and Keith for dinner at Chevy's on the river, Larkin and I went to the Sacramento Kings versus Golden State Warriors NBA basketball game. Trailing by the score of 60 to 58 at halftime, the Kings kept the game close in the first half. The Warriors open a 12 point lead by the end of the third quarter and won the game by the score of 128 to 116.

DeMarcus Cousins was the high scorer for the Kings. In only 30 minutes, he had 33 points on 12 for 27 from the field, 2 for 6 from three and 7 for 9 from the three throw line. Cousins added 10 rebounds and 3 steals.

Stephen Curry was the high scorer for the Kings. In 38 minutes, he had 38 points on 12 for 21 from the field and 6 for 7 from the free throw line. Curry was 8 for 14 from three point range. He added 11 assists and 6 rebounds. Some of Curry's three point shots were circus shots; it is amazing to see some of the angles that he is shooting from...

The game was a sell-out. There were lots and lots of Warrior jerseys. It seemed like they raised the prices for everything from the parking to food and drinks. It will be interesting to see if the prices are lower at the next game I attend.

Amazing the Kings are only two games behind the Utah Jazz for the eighth playoff spot. With Rondo leading the league in assists, they actually seem to have a functional offense.

The group made a stop at the Skylight lounge after the game and then Larkin dropped me at Malabar. Jack eventually gave me a ride home.