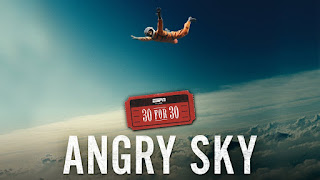 Running on the treadmill at home over a couple of nights, I finally watched Angry Sky. This is the thirtieth and final installment of ESPN's 30 for 30 volume II. An episode guide for Vol II is here. 30 for 30 Volume 3 debuted on October 13, 2015.

The film is based loosely on the book Magnificent Failure: Free Fall from the Edge of Space. In the mid-60's, Nick Piantanida, a truck driver from New Jersey, attempted the same parachute jump from the edge of space as Felix Baumgartner and Red Bull.

Piantandia had a film crew following him around in the early 1960s. As a result, there is some amazing footage of him and his two unsuccessful attempts. Additionally, the film includes interviews with his widow, brother and a number of other key figures.

This is an odd film. There is no doubt that it is a fascinating story. Nick Piantanida was a larger than life character. It is amazing what he was trying to accomplish on a shoestring almost 50 years ago. There are parts of the film that are hard to watch; too much like watching a car crash in slow motion...
By Heringer at 1/24/2016 11:59:00 PM