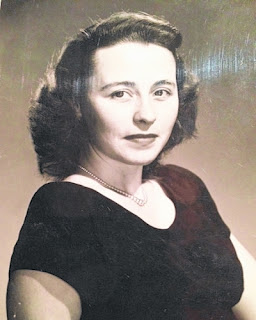 Betty Wallen entered this world in Decatur, IL to Virginia and Carroll Bird on May 16, 1927. The family re-located to southern California shortly thereafter where she was joined by brothers Tom and John over the next 16 years. She passed from us on December 21, 2015 at the age of 88.

Always an exceptional student, Betty also enjoyed the stage and often was part of St. Mary's academy school musicals during her school years. As was the case for many folks, the Depression hit her family very hard and she grew up in a home with multiple family members, sharing a room with her cousin and aunt for many of her early years. She often fondly recalled these years as wonderful because of the closeness it created in her family.

After Betty graduated from high school, she was awarded an academic scholarship to St. Mary's College where she graduated with a Professional Nurse degree in 1947. She did her advanced training at St. Vincent's Hospital in Los Angeles where she subsequently became a surgical nurse. It was at St. Mary's and St. Vincent's that she made many of her lifelong friends and met the love her life, Bob Wallen, an aspiring young surgeon freshly home from the Medical Corps in the Pacific Theatre of WWII. They married on September 22, 1951 and shared nearly the next 57 years together raising six children and enjoying 12 grandchildren until Bob passed away in 2008.

Betty put her nursing career on hold while raising six children initially in southern California until the family relocated to the Redding area in 1971. But shortly after moving to Redding, she returned to nursing as an educator in the nursing program at Shasta College, a job she truly cherished.

Betty was a remarkable woman in every role she played…mother, grandmother, wife, sister and daughter! Her warm dark blue eyes and gentle smile welcomed all she met and she made many friends during her 44 years in Redding. A deeply religious woman, she lived her Catholic faith daily and remained a parishioner first at St. Joseph's and at Our Lady of Mercy until her death. Always providing those around her as a role model, she never demonstrated this more profoundly then the 40+ years she battled multiple sclerosis never complaining and rarely missing any family events.

During the last two decades of her life when mobility for her became more challenging, Betty took particular pleasure in hosting family barbeques at the family home in Palo Cedro, the last being her 88th birthday this past May. She loved her family passionately and often attended the soccer, baseball, basketball and football games of her grands as they competed in high school and college athletics. She was not only a great fan but very knowledgeable and passionate one as well!

A Rosary followed by a funeral service will be held this Sunday, December 27th at the Allen & Dahl Funeral Chapel on Deschutes Rd. in Palo Cedro with a reception to follow at the family home. Following cremation, Betty will be interred on her birthday in May of 2016 with her beloved husband, Bob, at the family plot in Cobb Valley, CA. following a family celebration of her life.

The family asks that memorial contributions be made to either the Multiple Sclerosis Society or the Shasta College Nursing Program.
By Heringer at 1/07/2016 11:59:00 PM