Up at 3 am, Jack and I rolled from the house just after 4 am. Checking Jack's bag, it was of course overweight… We caught a 5:55 am Southwest flight nonstop to Baltimore. Boarding with A22, I was able to get the two seat exit row.

I spent the loin’s share of the flight working on my weekly status report. The wifi was solid for the whole trip. Although it took a while, I was able to send my status report with 6 MG of attachments.

We landed at 1:30 pm; the flight was almost thirty minutes early. We collected Jack’s checked bag. I had never rented a car at BWI before. It was a struggle. There was a huge line for rental car bus and a long ride to the rental car building.

Although Hertz had texted me a stall number and a car, there was not a vehicle in the stall. After some minor running amok, we ended up with a Ford Explorer and were on our way to Nooter’s house. We rolled up to Nooter's house about 3:45 pm. We visited for a little bit and then took off to check into the hotel. I am spending two nights at the Bethesda Marriott Suites. It is only about 2 1/2 miles from the Nooters. 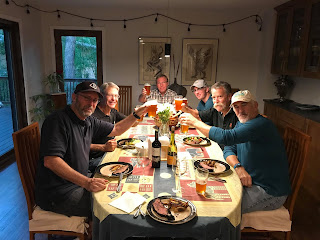 After getting checked in, we headed back to Nooters. Over the course of the next couple of hours, Gribi and then Snipes, Wallen and Moore rolled up. I don't believe that I have seen Gribi since Nooter's wedding thirty years ago.

We spent the evening catching up. It was great to see everyone. Nooter cooked a nice tri-tip dinner.

Jack and I eventually took an Uber back to the hotel just after midnight. I was surprised it was so late.

Amazingly, Hunter and Yuli showed up after Jack and I left. There were a couple of different stories: either their connection in Chicago was cancelled or they missed their flight. They ended up flying to San Diego, then to New Orleans and finally to National. In the aftermath, no one was sure how late the Hunters stayed before heading off to the hotel (3 am?).
By Heringer at 6/01/2018 11:59:00 PM