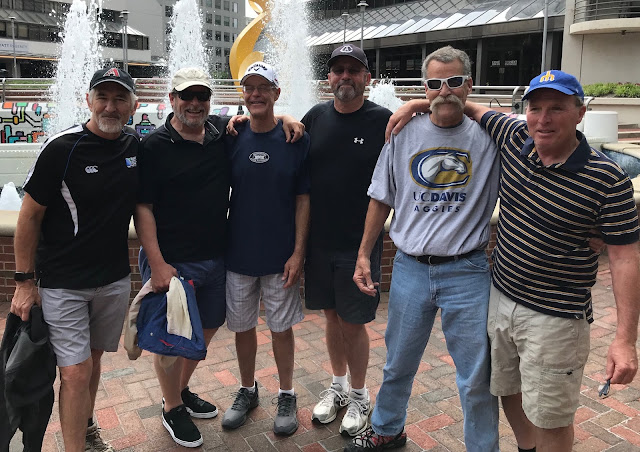 After a long day and a late night, Jack and I slept late. I eventually got up after 8 am. Given that we had left the rental car at Nooter, I decided to walk/run back. I covered the 2 1/2 miles in about 30 minutes.

The plan for the day was two pronged. First, Jack and I needed to get him moved into a house in Georgetown. Second, Nooter got tickets for the group to attend the South African Springboks versus Wales Dragons Rugby Game.

Jack and I rolled about 11:30 am to head into Georgetown. Things went very smoothly. We picked up the boxes that he had stored on campus. Jack made a quick connection to pick up the key. Double parking on the street, Jack unloaded the boxes into the front room of the house. I parked a couple blocks away and then came back to help him carry the boxes down in the basement. I will post some pictures of the house and the basement in the next couple of days. From there, Jack and I headed to a nearby Safeway to stock up on some groceries. Double-parking again, he unloaded the groceries.

Rob had said that we wanted to leave for the game at 2 pm. I got back to his house about 1:50 pm. Waiting for Hunter and Yuli, we eventually loaded everyone into the rental SUV and headed to the Bethesda Metro Station. Connecting with Hunter and Yuli there, we took the Metro to the Armory/Stadium stop. We walked from there to RFK Stadium. RFK Stadium is not in very good shape.

Wales beat South Africa by the score of 22 to 20. Although the set pieces in the first half were tedious, I enjoyed the game. I sat next to Gribi. Austin also joined us at the game.

Leaving the game, we lost Gribi. At one point, Wallen, Snipes and I backtracked from the Metro stop to the stadium to try and find him. Eventually, we wound our way back on the Metro to the rental car and then Nooter's house. Thankfully, Gribi ended up showing up about an hour after we got back.

We finished the night with a very late dinner. Nooter made salmon, rice and eggplant. I kept wandering into the front room to watch the third period of game three of the Capitals versus Knights NHL Stanley Cup playoff game. The Knights pulled their goalie with about 4 minutes to play. The pace of play was wild. The Capitals won the game by the score of 2 to 1. The win gave the Capitals a 2 to 1 advantage in the best of seven series.