Sharon and I worked with Don at the Farm Credit Banks. 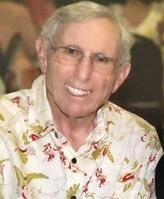 Don was born on September 1st, 1930 in Salt Lake City, UT to Paul Seese and Edna Hamilton Seese. He was raised in Great Falls, MT. He graduated from The University of Montana in 1952. After serving in the Air force during the Korean War, Don received an MBA from Stanford Business School in 1956. After graduation he received his CPA license. The next 37 years were spent in the banking industry, including working with Wells Fargo Bank Cooperation serving as Senior Vice President and Controller. Don has said that his "wonderful wife of 62 years was behind whatever success he had" and that "there is not enough space to write about his two daughters and six grandchildren." He was truly a devoted husband and father.

In 1959, Don married the love of his life, Joanne Lee. They lived in Marin in the 60's and 70's where they raised their family. His career also took him to Jacksonville, FL where he was CFO of Atlantic National Bank. In addition to his wife Joanne, Don is survived by his daughter Gayle Seese Long of Nevada City, CA and his daughter Lynn Seese Painter and her husband Jack Painter of Redding, CA; and six grandchildren: Sierra Long, Carley Long, Cody Long, Emily Wong, Joanna Painter, and Daniel Painter, and one great-grandchild: Keller Wong, and his sister Carolyn LaRoche. He was preceded in death by his identical twin brother, "Billy", and his older brother Paul.

Don and Joanne loved to travel and have visited over 40 countries. Wanting to keep busy after retirement, Don volunteered with several organizations. His most meaningful was doing consulting work which took him to developing countries of Kazakhstan, Kyrgyzstan, Ethiopia and Mongolia.

Don was passionate about staying physically active throughout his life. He participated in fly fishing, hiking (including Mt. Whitney), tennis, golf and skiing. He was still hitting the ski slopes well into his 80's. Don was an avid golfer and upon retirement he and Joanne purchased a home in the middle of a golf course. Don then served on the board of the Cameron Park Country Club and as director of finance of the homeowners association for over 20 years. Throughout his life, he was active in the Presbyterian Church and at times served as an Elder. Don Seese was a true man of integrity with a kind and generous heart. His words to live by: "Try to do your best."