Jack played in his fourth baseball game of the season. He is playing very well in the field. While he was playing left field, a ball was hit high in the air to left center. He initially misjudged it and ended up leaping at the last second. He caught the ball and landed hard on the ground, but held on to the ball. Between innings, the coach from the other team came over and told him that it was best catch he had ever seen made in Single A. At this level, balls hit to the outfield are rarely caught.

Playing first base, he fielded a grounder to the right side, nonchalantly tagged out the runner to going to first for the third out and continued jogging to the dugout. Jack has a very good feel for what is going on.

I do need to get him to the batting cage. He feels to be regressing a little at the plate. 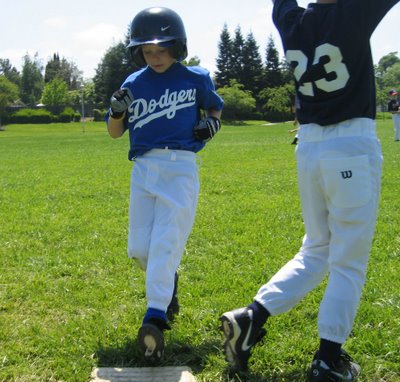