The plan for the day is to attack the first floor of the Museo Nacional del Prado. After having breakfast on the terrace at the Ritz, we wandered across the street. Jack had been marking off the rooms that we saw yesterday and the masterpieces listed on museum map. He was on a mission to see all of the rooms and all of the listed masterpieces. This took us another two hours and 45 minutes.

In total, we spent almost six hours over two days going through the Prado. At this point, Sharon was done with Spanish art.

We had a light lunch at the same place as yesterday; Jack and Sharon had seen some mini-hamburgers and wanted to go back for these. 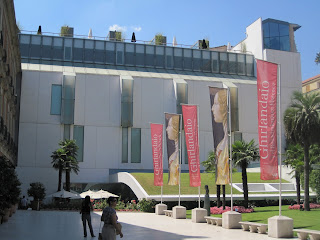 On the corner across the street from our hotel and the Prado is the Museo Thyssen-Bornemisza. After recharging our batteries with lunch, we attacked this museum. Originally a private collection, it fills in where the Prado and the Sofia are weak, particulary with Impressionism which is one of Sharon's favorites. We moved through this building fairly quickly focusing on pieces by artists that we are familar with. There were a couple of nice pieces, including ones by Caravaggio, Rembrandt and Degas. Sharon bought two nice prints by Degas.

At this point, we were all more than a little beat. We wandered back to the room and watched the end of Stage 19 of the Tour de France.

We had a drink on the terrace of the hotel before we started out for the night. Sharon has bought enough stuff that we are going to need another bag to get home. We headed towards Puerta del Sol and found a place to buy another piece of luggage.

From there, we wandered towards Plaza Mayor and then back towards Plaza Santa Ana looking for t-shirts for Jack and Sharon.. We had one more drink on the street across from where we were going to dinner.

We finished the evening with dinner at El Caldero Restaurante. Sharon was unhappy with the paella last night so we had seafood paella and Jack had veal.

I am amazed how late the Spanish eat dinner. We went to the restaurant about 8:45 p.m. and it was completely empty. About 10 p.m., it started to fill up and became very busy. This was true the whole trip; noone really starts to sit down to eat until after 10 p.m.