Up early, we had breakfast at the hotel. The plan for the day is to catch an early on and off tourist bus and head towards Sagrada Familia. We caught the second bus of the day on the blue line just after 9:00 a.m.

I was not previously familar with Antoni Gaudi, but he is a major factor in Barcelona. It seemed like everywhere that we went they were talking about or pointing out a building or other feature designed by Gaudi. Our first stop for the day was Le Pedrera. This is described as Barcelona's "quintessenital Modernists building." We toured the apartment, the attic and the rooftop. The undulating rooftop with its 30 chimneys is spectacular!
Back on the bus, we headed towards Sagrada Familia. The line to get in was about 35 minutes long. We rented a great 70 minute audio tour for each of us. I was not sure what to expect. Sharon and I have visited Cathdrals all over the world, but even unfinished, I have not seen anything like Sagrada Familia. It is not expected to be finished for at least another 20 years. Even in an unfinished stage, it is amazing. My words and even pictures can not do justice to the scale and detail of the project.
From there, we got back on the tourist bus and wound our way across the city. Sharon had seen the Tour de France finish in front of the Catalan Art Museum last year. We shifted to the red line and finally made our way there. We had a late lunch in the restaurant of the museum. The front of the museum provides a great view of Barcelona. Although we had not really planned to, we ended up touring part of the museum. In particular, it includes Europe's best collection of Romanesque frescos. Jack was fascinated by this part of the museum. 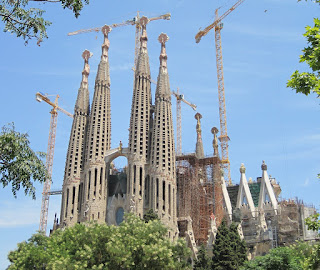 Behind this museum is the Olympic Stadium built for the 1992 Olympics. Jack wanted to go into the stadium so we wandered up and into the stadium.
Catching the bus, we continued to wind our way back around to the Placa de Catalunya. By the time, we got back to the square, it was after 7:00 p.m. While I enjoyed the opportunity to see some of the city on the bus, it dragged towards the end.

We had a late dinner at Navarra near the plaza. Sharon and I had veal, while Jack had a hamburger. After dinner, we walked the length of the Ramblas from the Placa de Catalunya to the Columbus Monument. It is hard to describe the scene. It was a cross between Halloween and the state fair. After a stop at a three story McDonald's for dessert, it was after 11:30 p.m. before we got back to the hotel.