My cell phone rang at 3:00 a.m.; it was Wallen. I rolled over looked at the phone, cursed him and went back to sleep. Up fairly early we wandered towards the aqueduct looking for someplace to have breakfast.

Stopping to get some money, the ATM machine ate my card. Luckily the bank behind the ATM was open. This kicked off an hour circus of trying to get the card back. No one in the bank spoke much English. I need to write more with our experiences with the language in a future post. After trying to talk to them, they told me to come back in 30 minutes.

We ended up wandering back to the Plaza Major and having breakfast across from our hotel. After a quick bite, I headed back to the bank to try and regain my card; fortunately, I was successful.

This is moving day. We packed up the room and had them bring up the car. The plan for day is to head to Avila and then on to Toledo. It was about an hour drive To Avila. 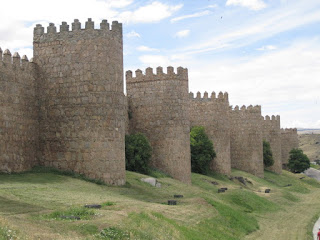 Avila’s fortified wall is the oldest, most complete and best preserved in Spain. We toured the Cathedral de Avila which houses one painting by El Greco. From there, we paid to climb the wall and walked along a section. We finished with a quick tour of the chapel at the Convent of St. Teresa and a great lunch of chicken and artichoke salad in a street just off the market square.

We had originally talked about taking the freeway back towards Madrid from Avila, but the GPS lead us on a course cross-country straight towards Toledo. It was a two hour drive across an interesting mix of countryside. Closer to Toledo, the terrain reminded me of the Sierra-Nevada foothills, but the earlier sections of the drive were unique. Leaving Avila, we passed through a fairly mountainous section with a different mix of trees.

For the second straight day, the GPS led us right to the hotel. We are staying the next two nights at Hostel de Cardendal. This hotel is a 17th century bishop’s palace built into the wall.

After exploring the hotel and relaxing in the room, we walked up to the Plaza de Zocodover. Toledo is built on the top of hill and is going to include more walking than anywhere else that we have been.

From the Plaza, we took a 50 minute tourist train that took us around the outside of the walled city. I was surprised because I had expected to tour the inside of the city. It included some great views of the fort, the cathedral and the city from the other side of the river gorge.

Wandering towards the cathedral, we found a place for a drink and a snack. We finished the night with dinner at Adolfo Vinoteca. We split plates of cheese, duck and grilled vegetables.

Leaving the restaurant, we give Jack the map and let him guide back through the twisting streets to a set of escalators near our hotel. I was amazed how well he did.

We were back to the room by a little after 10 a.m.; the earliest that we have been in the room the whole trip. Sharon and Jack finished the night watching an episode of the Simpson on the iPad.
By Heringer at 7/21/2010 11:59:00 PM