The plane finally hit the ground in Spain about 8:40 a.m., only about 20 minutes behind schedule. Both Sharon and I agreed that in our limited expereience set, this was one of the easiest trans-atlantic trips we have made.

It took forever to get the luggage. By the time, we collected the luggage, breezed through customs, caught a taxi to the hotel, it was about 10:30 a.m.

We dropped the luggage at the hotel. We are spending the next two nights at the Hotel Palace.

With the room not ready for a hour or two, we walked to the Placa de Cayalunya to check out the tourist bus. From there we wandered down The Ramblas. The Ramblas is one of the tourable pedestrian thoroughfares in Europe. We eventually stopped and had a quick bite to eat at Traverna Basca Irati, an interesting little place that Sharon found in the Rick Steven's book. It serves hot and cold Basque pintxos. 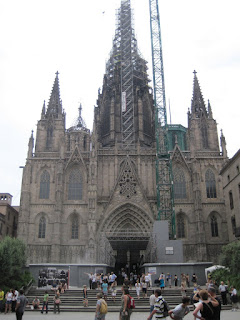 Working our way back towards the hotel, we dove into a neighborhood called the Barrio Gotic. It is the area surrounding the Barcelona Cathedral. Although we had not planned to, we ended up touring the Catherdeal. The high points included all of the chapels that line the walls and the 15th century choir that dominates the interior.

We eventually wound our way back to the hotel. With only little sleep on the plane over the 18 hour trip, we all crashed for a nap for an hour or two.

By 4:00 p.m., we were ready to go again. We found a yoga place for Sharon near the hotel and then jumped on the Metro. The goal for the late afternoon was the Picasso Museum.

Standing on the street trying to get our bearings to the Museum, I realized there was a third voice to the conversation. Jack had one of the guidebooks open and was vocal in his opinion about which way to go. This is definitely going to be a new dynamic. It is hard enough sometimes for Sharon and I to agree about directions!

We wandered through the La Riberia neighbor to get to the Picasso Museum. I really enjoyed this. It focuses on his earlier work. I read volume one of a series on his life.

Jack and Sharon then decided that they wanted to tour a Chocolate Museum.

Wandering back towards the Metro, we stopped and had some sangria at the Placa de L'Angel. I am enjoying Barcelona. I will organize some general throughts over the next several days.

We finished the day with a late dinner on the Mediterranean. We took a taxi to the waterfront and had a late dinner at Restaurant La Fonda del Port Olímpic. Sharon and I both had fisherman's paella, while Jack had lamb chops. It was 11:30 p.m. by the time we got back to the room and down to bed.