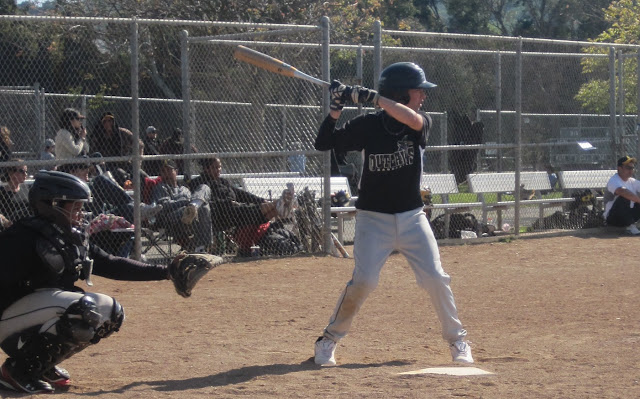 Back for the second day of the All World Baseball Bring The Funk Tournament at Riverfront Park in Martinez, the Outlaws played the Concord Hawks. In order to be one of the top four teams and advance to the championship round, the Outlaws needed to win.

At the plate, Jack was 2 for 4 with 3 RBIs and a strike-out. In his first at-bat, he hit a 2 and 2 pitch for a line drive right at the second baseman for an out. With Jeremy on second, Jack drove a 0 and 1 pitch into left center for a single and a RBI in his second plate appearance. He stole second and went to third on a passed ball, but ended the inning there. In his third at-bat, Jack tried to check his swing on a high 0 and 2 pitch, but was called out. With Cooper on third and Trevor on second in the fifth inning, Jack drove a low 1 and 1 pitch into right center to drive in two runs and end the game. There is a 8 run rule after five innings.

In the field, Jack played four innings at third and pitched an inning. He had one put-out. Jack made a nice catch on a pop-up in foul territory.

Jack threw 23 pitches, including 15 strikes and 8 balls. He threw three or four knuckle balls. Jack says that it is a variation between a two finger and four finger knuckle ball. The batters swung wildly at almost all of them and the catcher had a very hard time tracking the ball.

The Outlaws won the game by the score of 11 to 2. The box score is here.

With a record of 3 wins and 1 loss, the Outlaws were seeded 2th out of the 9 teams into the championship single elimination round. They played the Albany Thunder in the semi-final game. Everyone was feeling optimistic for two reasons. First, the Outlaws had beaten the Thunder on Saturday. Second, and more importantly, the Outlaws had gotten through the first four games without using their best two pitchers!

At the plate, Jack was 1 for 3 with an RBI. In his first at-bat with one out and Trevor on third, Jack lined a 0 and 1 pitch into left field for a single and an RBI. Jack hit a 2 and 1 pitch for a hard ground ball up the middle in his second plate appearance. When it was hit, I was sure that it was a single. The shortstop made a great diving stop and threw Jack out at first. Protecting with two strikes, Jack grounded back to the pitcher for an out in his third plate appearance.

In the field, Jack played six innings at third. He had an assist and a put-out. In the top of the second with runners on second and third and no outs, Jack fielded a grounder to the left side, set his feet and threw a strike to the plate to get the runner trying to go home. In the top of the six, the batter hit a line drive to the fence. Trying to stretch the hit into a triple, Jack took the relay throw from the shortstop to tag out the runner at third and end the game.

With a couple of errors by their catcher and shortstop, the Outlaws got behind and started to hang their heads. The Thunder took advantage of the sloppy play and won the game by the score of 8 to 2. The box score is here.

The Outlaws have 12 wins and 9 losses for the Spring 2011 season. The game log is here.

In spite of getting knocked out in the semi-final game, there was a lot of good from the weekend. With only 9 kids on the roster for the weekend, the Outlaws pitched 8 of the boys. Only Trevor didn't pitch. The Outlaws played 24 innings of solid baseball and probably 5 innings of really sloppy baseball. With the Easter weekend in two weeks, the Outlaws are off until the end of month; I am not sure where they are playing next.
Posted by Heringer at 4/10/2011 11:59:00 PM