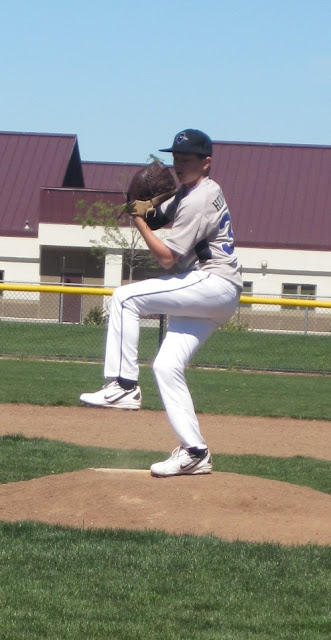 On Sunday, the Outlaws scrimmaged the Elk Grove Longhorns in double header. With the wind blowing out of the north, it was surprisingly cold.

Jack has played with several of the Longhorns players in the past, including Keaton, Austin and Dillon. They all played together on the Gunners team that went to Cooperstown in 2009.

At the plate, Jack was 1 for 4 with a single up the middle, a fielder's choice on a grounder to third and two strike-outs. He stole second and would have scored from third if Josh was a little faster!

Unfortunately, Jack's three innings at first base were an adventure. I was not scoring, but in a normal game, I would have probably charged three or four errors. Trevor fielded a ball at second, he hesitated and then threw wide left of the bag. From my angle, I couldn't tell if Jack should have been able to knock it down. Cooper fielded a ball at deep short and threw a one hopper to Jack that he couldn't dig out. Jack had several throws from pitchers and in a run-down that he got by him and allowed the runner to advance.

At second base, Jack handled a grounder to the right side and threw to first for the out. In center field, Jack made a nice sliding catch on looping fly ball in right center.

Jack pitched the first inning of the second game. He give up a lead-off double on the first pitch. At this point, Jack got pissed; he always pitches better when he is a little angry. Doing a nice job of holding the runner on second, Jack struck out the next two batters swinging. He then hit the fourth batter in back. With runners on first and second, Jack coaxed a grounder to the right side from the fifth batter for the third out.

It will be interesting to see if the Outlaws start to pitch him. In 56 tournament games since Memorial Day of 2010, Jack has only pitched 1 2/3 innings. He pitched in a consolation game against the Northern California Grizzlies last September. In that outing, he was very wild and walked 5 batters. Jack has changed his pitching motion since then. He has a very deliberate wind-up with a higher leg kick. If Jack does pitch, it will be interesting to see if he is effective in holding runners.