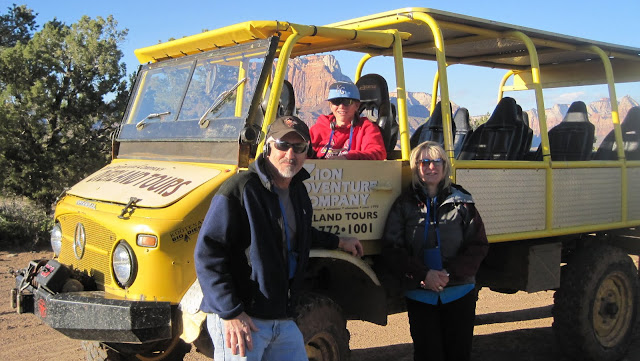 After a couple of long ambitious days, we slept late. We had a late breakfast at the Mean Bean Coffee House. While I went for 6.3 mile run on the Pa'rus Trail and up the Scenic Drive, Sharon had a massage at the spa at the hotel.

We spent the early afternoon wandering through Springdale, including the David West and David Pettit galleries. Sharon bought a print from the David West gallery; he was actually there and signed the print.

We had a late lunch at the Whiptail Grill. This was across the street from Flaningan's Inn. Sharon and I had summer squash enchiladas, while Jack had fish tacos. I would highly recommend this restaurant; the food was very good.

The plan for the day to take an excursion with the Zion Adventure Company. We took a three hour tour of the cliffs and canyons skirting the south of the park in a custom Mercedes Benz Unimog. This included a stop at the Grafton historic site. A scene from Butch Cassidy and the Sundance Kid was filmed here.

We had a very late dinner at Parallel 88. Sharon had a steak, I had lamb and Jack had ahi tuna. On the way back to the room, Jack got the Fantastic Four DVD from the front desk. By the time, it was done it was almost midnight.
Posted by Heringer at 4/26/2011 11:59:00 PM