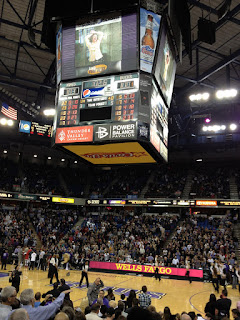 Jack and I went to the Sacramento Kings versus Milwaukee Bucks NBA basketball game. Trailing by 21 points at half-time, the Kings rallied in the second half to beat the Bucks by the score of 103 to 100!

Brandon Jennings led Milwaukee with 31 points on 12 for 23 from the floor, 6 for 10 from three point range and 1 for 4 from the free throw line. Jennings looked very good.

I am not convinced that Jimmer Fredette is an NBA player. He had 7 points in 23 minutes. Fredette looked ineffective trying to cover Jennings and Beno Udrih on defense.

I was sure in April that I had seen the Kings play in Sacramento for the last time. When the strike was finally settled, I went back and forth about continuing to participate in the season ticket group. At the last minute, I decide to stay. While I am still not sure it was the right decision, I had a very nice evening at the game with Jack.