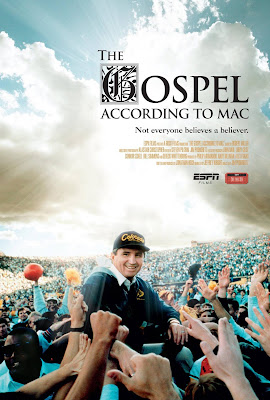 Running on the treadmill at the hotel, I watched The Gospel According to Mac. This is the third installment of ESPN's 30 for 30 Volume 3. An episode guide for Vol 3 is here.

I have never really followed college football. Consequently, I didn't know anything about Bill McCartney's story. The story reads like a Hollywood script. The major plot points include:
Bill McCartney participated in the making of the documentary. There is a lot of interview footage of him and key players from the Buffalo teams used throughout the film. I was very surprised by the story. I actually gasped a couple of times. Although I struggle with finding time to watch the two hour 30 for 30s, this one is worth looking for!
By Heringer at 11/03/2015 11:59:00 PM