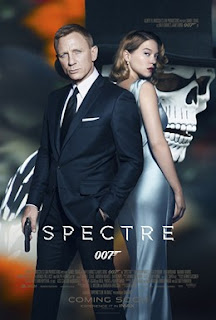 After dinner at Cafe Bernardo, Sharon and I went to see Spectre. Over the last few years, I watched all of the Bond films.

Sky fall is the twenty-fourth spy film in the James Bond series. It features Daniel Craig's fourth performance as James Bond. The story features James Bond's first encounter with the global criminal organisation Spectre; it marks the group's first appearance in a Bond film since 1971's Diamonds Are Forever.

In addition to Daniel Craig as James Bond, agent 007, the film includes: Christoph Waltz as Ernst Stavro Blofeld, a man believed to be dead whose father helped raise Bond after his parents died; Léa Seydoux as Dr. Madeleine Swann, a psychologist working at a private medical clinic in the Austrian Alps and the daughter of Mr. White; Ben Whishaw as Q, the MI6 quartermaster; Naomie Harris as Eve Moneypenny, a former agent who left the field to become M's assistant; Ralph Fiennes as Gareth Mallory, the head of MI6, and; Jesper Christensen as Mr. White, a fugitive from MI6 and a senior figure in the Quantum organisation, a former subsidiary of Spectre.

The plot revolves around the use of electronic surveillance. Spectre conspires to create a global surveillance network.

At almost two and a half hours, it is both the longest and the most expensive Bond film ever made. You can see where they spent the money; the scale and detail of the opening scene set in Mexico City is amazing.

I enjoyed parts of the movie, but felt that it was overwrought. It could have been trimmed down and tightened up a lot. I did enjoy Christoph Waltz's performance and the reintroduction of Blofeld. Sharon was less enthusiastic; in particular, she said that "it was the worst Bond girl ever."  Overall, I give it a B-.  It is definitely the weakest of the four Daniel Craig Bond films.
By Heringer at 11/14/2015 11:59:00 PM