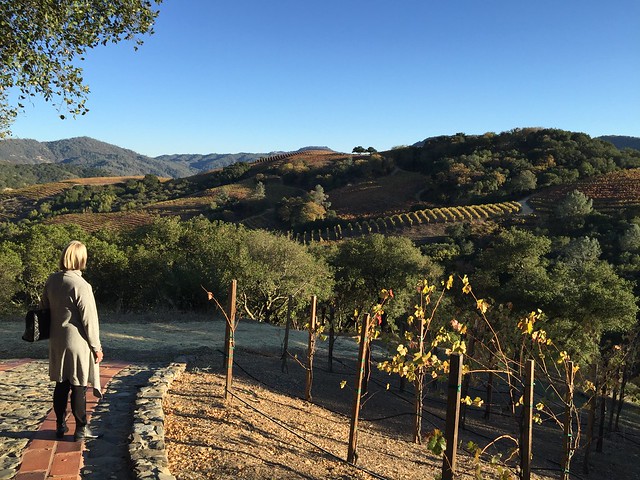 With Sharon off for Veterans Day, we met in Napa in the afternoon.

I had made a reservation at Schramsburg. Founded in 1862, Schramsberg is the second oldest winery in the Napa Valley. Charles Krug is the oldest, while Larkmead is the third oldest. We had a nice tour that included the caves followed by a tasting.

After Schramsburg, we made a quick stop at Tra Vigne for an appetizer. After being open for more than twenty years, Tra Vigne is closing on December 20. Over the course of the day, we heard a couple of different stories of how quickly it is going to reopen under new ownership.

From there, we headed to Kuleto. Sharon is a wine club member there and had two shipments to pick up.  We had a quick tasting and then wandered out to enjoy the view.

After checking into the hotel and getting lucky with a nice room, we finished the night having dinner at Morimoto in Napa. We had an assortment of appetizers and rolls. I was not that impressed with the food; I would rather have Mikunis...
By Heringer at 11/11/2015 11:59:00 PM