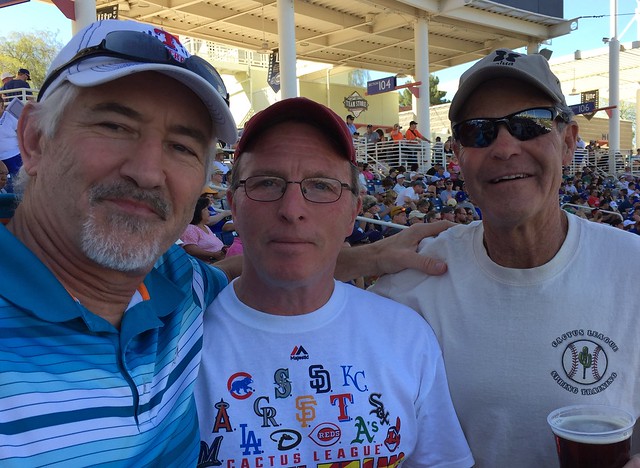 Up early, I texted Wallen and we made plans to go for a run. I packed up the room at the Phoenix Airport Marriott and headed towards the Wallen Condos.

Wallen and I went out for a morning run. We covered 4.15 miles in 45:21. We are not as fast as we once were... I always enjoy running with Wallen. I used to say that one of the reasons I trained so hard was so I could keep up with him a couple of times a year. Hopefully, we can continue run together for years to come. A map of the run is here.

After getting cleaned up, the group headed to Harlows. Jenny found this restaurant in 2004 and we have made it a regular stop for breakfast ever since. Wallen rode with me and we listened to the Proper Gentlemen album.

After breakfast, we headed to Maryvale. Although there are a lot of new ballparks in the last ten years, I have always enjoyed Maryvale. The plan for the day was to watch the Milwaukee Brewers versus Los Angeles Dodgers. Moore and one of his friends (Tim?) joined us for the game.

Former Oakland Athletic Scott Kazmir started for the split-squad Dodgers and allowed one earned run and four hits in four innings. Milwaukee Brewers outfielder Rymer Liriano was hit in the face by a pitch and was bleeding from his nose as he was carried off the field. The Brewers beat the Dodgers by the score of 3 to 1.


After the game, we wandered back to the Wallen Condos. The group, including Moore, spent an hour plus hanging out around the pool.

I made a questionable decision to fly out Sunday night. About 6 pm, I started to wind my way back to the airport. I dropped the rental car and took the shuttle to the airport. I caught a 8:35 pm flight from Phoenix to San Diego to Sacramento. Landing in Sacramento about 11:45 pm, it was about 12:30 am before I was in bed sleep.