For the fifth time in seven years, Larkin and I played in the Petersen Shootout [2010, 2011, 2012 and 2014]. We missed 2013 when Rod kept moving the date around and it finally landed on a weekend when Sharon, Jack and I were in H@waii. In 2015, Larkin wasn't available. I signed up with Borja as my wingman, but when he canceled at the last minute, I bailed. 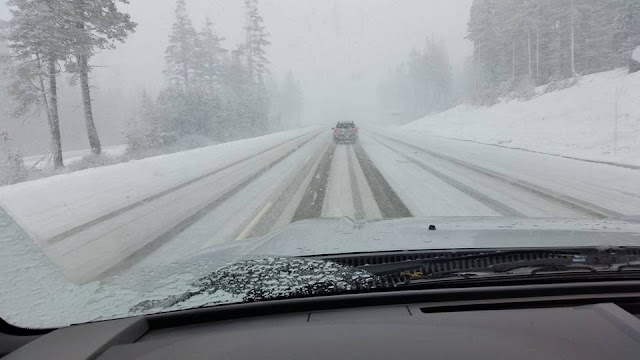 Leaving Carmichael about 8:30 am, I made a quick stop for gas and supplies. It rained hard all the way to Kingvale. At Kingvale, I hit the chain controls. Snowing pretty hard, it was slow and very slick on the grade down into Truckee. I finally got to the Silver Oak Golf Course a little after 12:00 pm. Although it cleared up through Reno, it was raining steadily again.

I frankly thought that we wouldn't end up playing, but everyone started off. Although it was supposed to be a shotgun start, Martin, Rod, Larkin and I teed off on the first hole. I actually played pretty well on the front nine. It stopped raining for four or five holes. I had a couple of nice pars and was striking the ball pretty well. I ended up hitting the ball to within about 19 feet on the par three sixth hole and winning the closet to the pin. With no one in front of us, we played the front nine in about one hour and 45 minutes.

We stopped for a hot dog after the front nine. Unfortunately, everyone ended up getting bunched up. Larkin and I played the 10th by ourselves and then skipped the 11th to catch up with Rod, Scott and Martin. With the rain continuing, I struggled a lot on the back nine. The group ended up skipping the three more holes and finishing on the eighteenth. 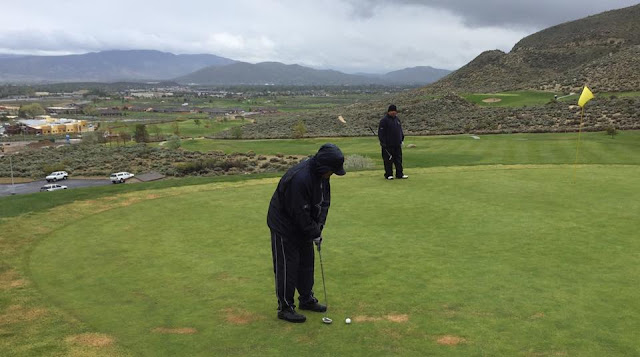 I have no idea what I scored. The scorecard was so wet that we couldn't have kept score if we had wanted to... [Note to self], I made a tactical mistake. I have a very nice set of rain gear that I bought to take to New Ze@land. Unfortunately, I brought the jacket, but not the pants! 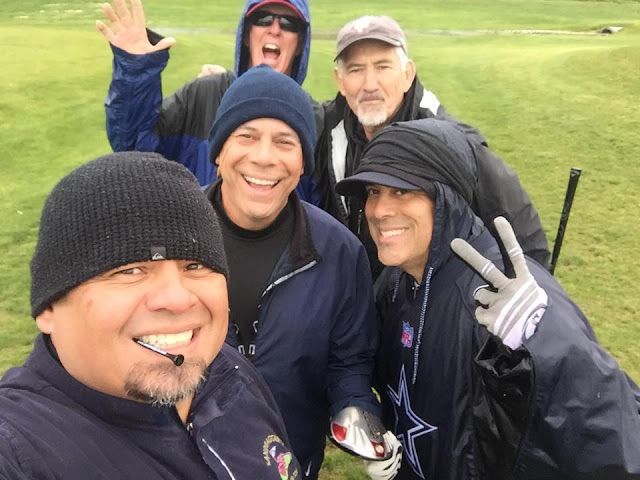 After finishing the golf, we headed to the Max Casino in Carson City. We have stayed at this hotel in 2010 and 2014. It is now a Wyndham Hotel.

Larkin and I got cleaned up and walked across the street for a late dinner at Red's Old 395 Grill. I had Cajun Chicken Pasta and Larkin had the Chicken Picatta. We ended up sitting and talking at the table for a long time.