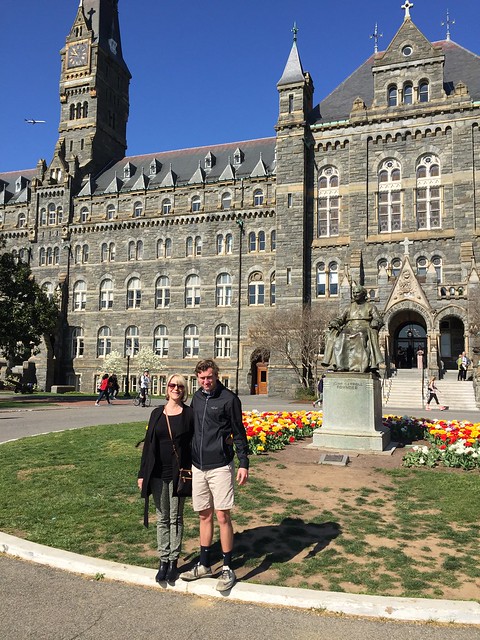 Sharon, Jack and I spent a long day in the Georgetown Admissions Ambassador Program (GAAP). After checking in at Healy Hall at 8:00 am, we took a campus tour. We then attended a welcome reception in historic Gaston Hall. Afterwards, Jack went to a student icebreaker, while Sharon and I went to a parent's college mingle. Connecting back up with Jack, we went to two campus spotlights: community service, advocacy and social justice; and introduction to career education. From there, we went to deans' academic information session for the McDonough School of Business in the Lohrfink Auditorium in the Hariri Building.

While Jack had lunch with other business school students, she and I had lunch at the Bulldog Tavern. We sat outside with a view of the Potomac River. After lunch, Sharon and I went to a campus resource panel for parent in Gaston Hall.

Catching back up with Jack, the three of us went to a faculty showcase titled "The Global Business Imperative" with Charles Skuba. This was essentially a sample class lecture...

We finished a long day with the convocation back in Gaston Hall. When it finished at 6:00 pm, Sharon and Jack headed to the bookstore, while I walked to meet Nooter and Barb at El Centro DF. It was great to see them. Sharon and Jack eventually joined us there.

Parting ways with the Nooters, we walked back to the hotel. Unfortunately, late in the afternoon, Southwest emailed Sharon that our flights on Saturday afternoon had been cancelled. Apparently, they were expecting some major weather in Denver. As a result, there was some running amok trying to figure out how to get home. Jack really wanted to be home Saturday night. The best option that I could find without paying an arm and a leg was an American Airlines flight through Phoenix on early Sunday morning.