We rolled from the hotel before 9 am. The group was scheduled to play the Dayton Valley Country Club. Arnold Palmer is listed as the course architect. Since 1995, the course has hosted a PGA qualifying tournament every year.

Compared to the rain and wind on Friday, the weather was almost perfect. After hitting the range, Larkin, Borja, Kevin and I teed off about 10:20 am. We were playing a shamble format. Although we used three of my drives on the front nine, I struggled and ended up with a liberally scored 56. 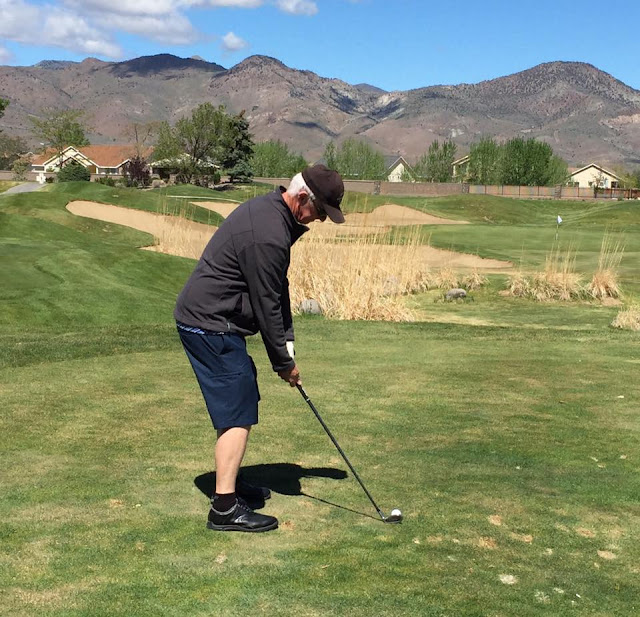 I settled down quite a bit on the back nine. With everyone stopping for lunch, we had two and a half open holes in front of us on the 10th. We used two more of my drives. I had a birdie on a par three off with Borja's drive and my 20 plus foot putt. I also had my own par when we used my drive on the 15th. I carded a 46 on the back nine. 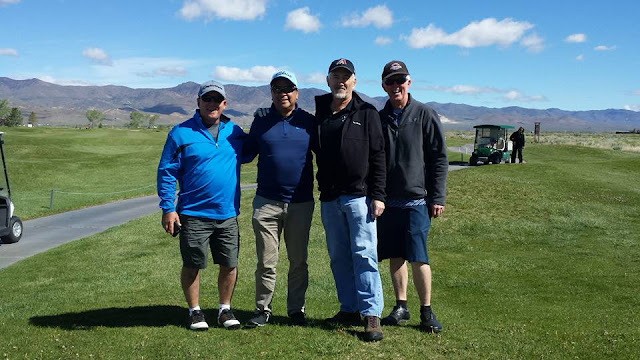 After everyone was done, we headed to a par three on the front nine. Borja ended up representing our group in a closest to the pin contest.

Rod had arranged dinner at J's Old Town Bistro in Dayton. I was pleasantly surprised. The bar was nice and the food was solid; I had lasagna. Larkin, Borja, Kevin and I ended up sitting at the table and talking long after everyone else split. I enjoyed having a chance to catch up with Borja.

Larkin and I finished the night watching the Clippers lose to Portland in the first round of the NBA playoffs in the room. At some point, Rod wandered in and slept on the bed for awhile!?!
By Heringer at 4/23/2016 11:59:00 PM