A long, satisfying day! Sharon, Jack, Drew, Morgan and I left the house at 8 am to head to the Memorial Auditorium for Jack's high school graduation. We queued up outside the auditorium about 8:30 am; there were quite a few people already there. The doors were opened a little after 9 am and everyone raced to get seats. Sharon was disappointed in the seats that we got. She was hoping to be lower.

It was nice graduation ceremony. Jack got one of the twelve awards that they gave out at the commencement. He received The Aloysius Gonzaga, S.J. Award. Named after the Jesuit patron saint of students, it is given to those Seniors who, in the spirit of the magis, have demonstrated extraordinary achievement in Jesuit's academic program. 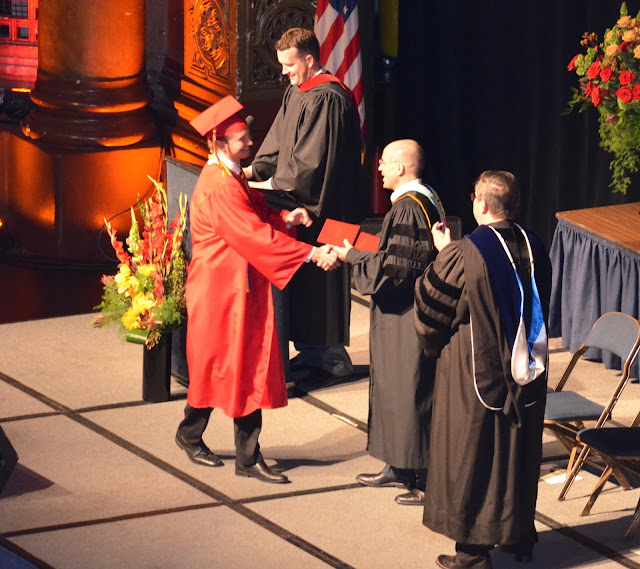 We spent quite a while milling around outside the auditorium after the ceremony visiting and taking pictures. I ended up taking more than 110 pictures! The best pictures are organized in a photo album here.

Eventually, we rounded up a group and headed down the block to Mikunis. The group included: Sharon, Jack, Drew, Morgan, Kiki, Tom, Eric and I. We had a couple of platters. We headed home after lunch for a nap.

In the first of many graduation parties scheduled for the next couple of weeks, we dropped Jack at Travis Bell's house in the late afternoon. Sharon and I joined the last hour of the party. Most of the dad's were cramped in the family room watching the Warriors win game 6 of the Western Conference NBA finals.

After the party, we took Jack, Gabe and Jason to K1 Speed. Jesuit High School is holding the class grad night there. The boys will be there from 9:00 pm Saturday night until 5:00 am Sunday morning.