Last summer, Sharon started floating the idea of moving the fall dinner party to Sea Ranch as part of celebrating our 20th wedding anniversary. Frankly, I never thought that she would be able to pull it off, but she did. We ended up getting the Larkins, Gainsleys, Sanborns, Renterias, Janie and Liz all together for a long weekend on the coast!

Liz, Janie and the Sanborns met us at our house in Carmichael about 8:30 am. We loaded Phil's truck up with food, drinks, luggage and golf clubs. I put the bikes on top of the Lexus. With Liz and Janie riding with Sharon and I, we rolled out about 9:15 am. We made a quick stop at Raley's for dry ice for the cake.

The plan was to meet the rest of the group at the Bouchaine Winery. We had a tasting and ate lunch on the back patio. Sharon and Janie are both wine club members at Bouchaine... 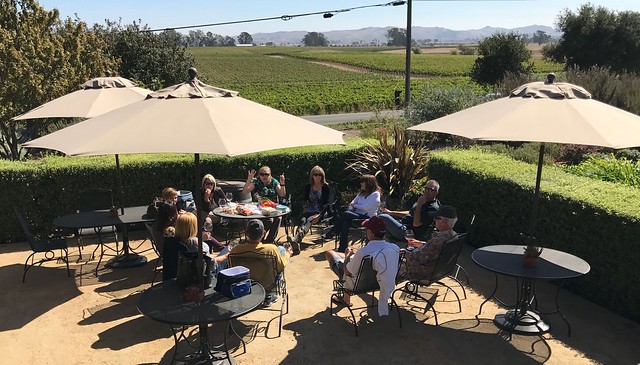 From there, we headed to Bodega Bay. The group made a quick stop at Tides Wharf Fish Market for some smoked salmon.

We finally rolled into Gualala about 3:40 pm. We had to stop and pick up the key for one of the houses.

The Renterias made dinner for everyone at Vista Del Mar. Julie served a great chili verde. After dinner, Sharon got everyone to play Cards Against Humanity.